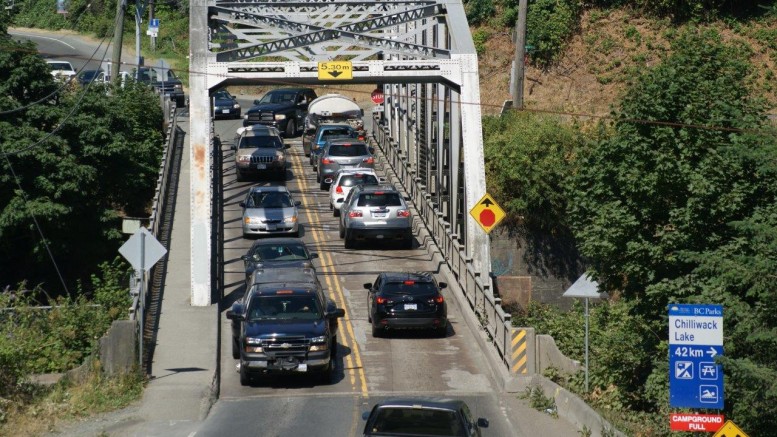 Chilliwack/Cultus Lake –  Ironically, just days after the announcement of the new Vedder Bridge and the rejoicing of easing traffic congestion, the City of Chilliwack were blindsided by WorkSafe BC and WCB Workers Compensation Board. The flaggers who control summer traffic have to go.

Here is the official statement from City Hall:

During the summer months, the City of Chilliwack facilitates the use of traffic control personnel (TCP) to control Cultus Lake traffic, both at the three way stop at the Vedder Bridge and at the signalled intersection at the Cultus Lake turnoff. This additional traffic control helps relieve some congestion in the Vedder Crossing area and keeps motorists moving.

Recently, Work Safe BC reviewed the use of TCPs at these intersections and informed the City of Chilliwack that TCPs cannot be used for this purpose as it creates an unsafe situation for traffic control staff.

On Tuesday, July 14, the City received notification from WCB that TCPs are not to be used for the purpose of reducing traffic line ups. Therefore, effective immediately, TCPs cannot be used at the above mentioned intersections to improve the flow of traffic.

Upon receiving this news, City staff immediately began working on alternative strategies to ensure minimal impact to the traveling public in these areas over the weekend. Starting this weekend, manually controlled traffic signals will be used at the above mentioned intersections. The goal is to move traffic along in a similar manner as a TCP, clearing lineups as needed. The light operator will be away from the flow of traffic, complying with WCB regulations.

The City of Chilliwack would like to thank the travelling public in advance for their patience as this new system is implemented.