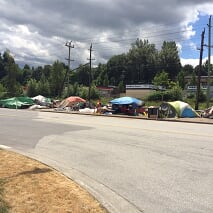 Abbotsford BC (The Canadian Press)– A trial is set to begin Monday, in BC Supreme court today arguing for the right of homeless people to occupy public space.

The Pivot Legal Society is challenging three city bylaws in Abbotsford, that have been used to displace homeless residents from public areas.

Pivot says the city’s actions are an infringement on Canadians’ constitutional rights.

According to Pivot, homeless people in Abbotsford say inadequate shelter space means public areas are one of the few options available to them.

Earlier this year City Crews were chastised when they tried to drive away the homeless camp, using intimidation tactics including the spread of chicken manure on their campsite.

Provincial Money For Anti-Racism Programs in Abbotsford And Langley

10 AM Weather Info Bulletin For Abbotsford Including Warming Centres