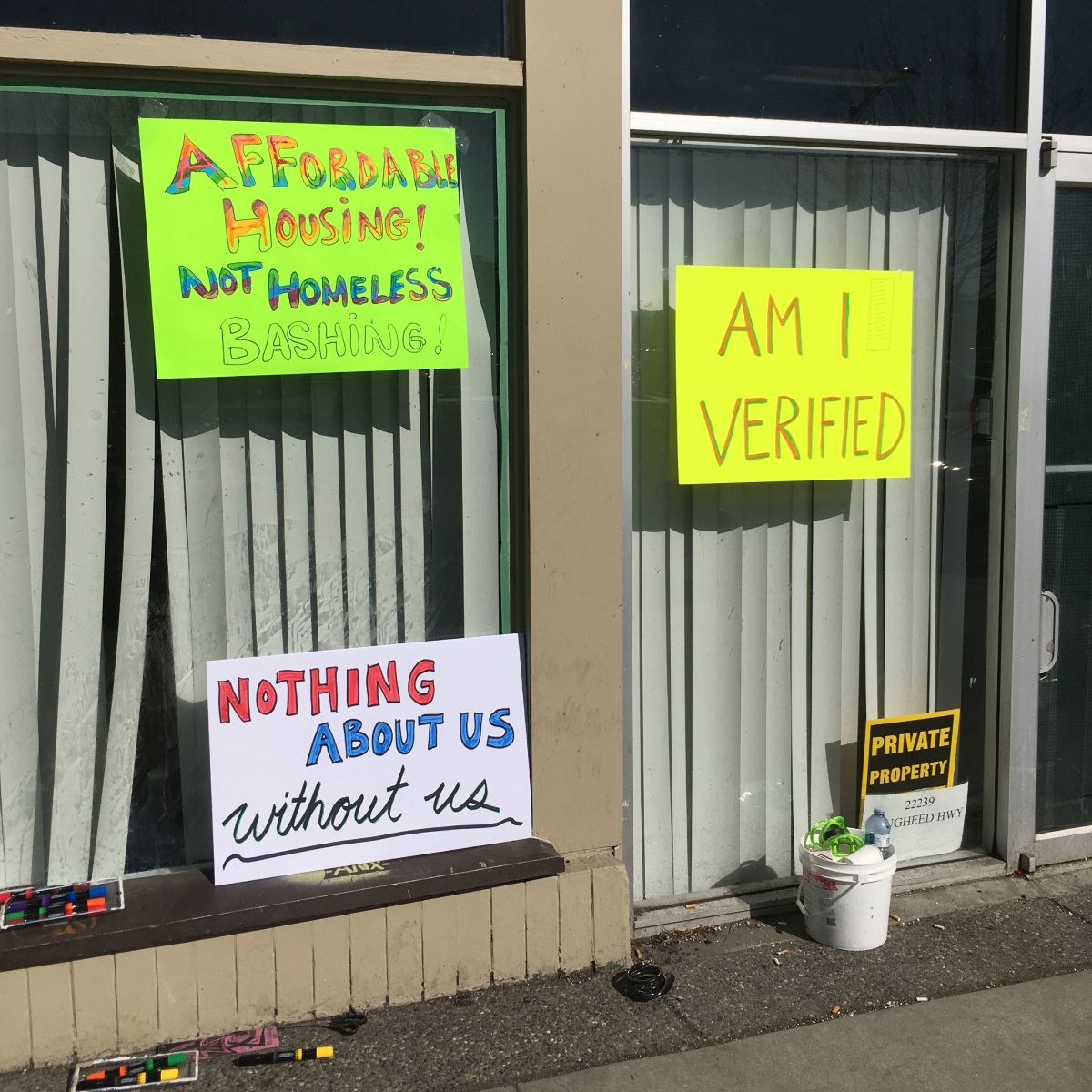 Maple Ridge – This is an opinion piece from Alliance Against Displacement. They have been the advocates for the homeless camp in Maple Ridge called Anita’s Place.

Earlier this week, the Province of BC went ahead with a plan for modular accomodations for the homeless there.

The FVN story is here.

This week, the Province announced that it will be pushing ahead with a new temporary, supportive modular housing project in Maple Ridge. While members of the homeless community in Maple Ridge welcomes the gesture of a provincial intervention, they are disappointed that Housing Minister Selina Robinson’s solution is not permanent social housing, but instead: temporary, institutionalized modular housing that will still leave people with nowhere to go for the next five months.

Nothing about us without us

In response to City of Maple Ridge complaints that they were not consulted, the Province has explained their extensive efforts to meet with and involve Mayor Morden in housing plans. The one group neither side has spoken with is the group most affected by government schemes to manage homelessness. Despite having reached out two weeks ago to offer their expertise and direction in policies that affect them more than anyone, Anita Place community members have yet to hear a word from Minister Robinson, and her Ministry’s press release confirms that she has no interest in listening to their voices, let alone following their leadership.

Joe, who helped start Anita Place and was born in Maple Ridge, says, “The Province’s announcement is what we expected. It’s the bare minimum. It’s doing what’s expected of them. The conversation always turns back to beds and shelters—they’re always avoiding the question of homes.”

Joe’s critique points to the basic problem with the Province’s solution: temporary, institutional modular units are shelters, not homes. The Burnett Street modular housing will be operated the same way that Maple Ridge’s Royal Crescent modular housing facility is—as so-called “supportive” housing where residents are forced to choose between their rights and autonomy or a roof over their heads.

Renee, a longtime resident of Anita Place, says she thinks modular housing contributes to the stigma and discrimination that surrounds being low-income in Maple Ridge. She says, “I want a place where I can fit in with the working community,” not treated as a threat to the public. At the City Council workshop on “Made in Maple Ridge housing,” Mayor Mike Morden assured outraged opponents of modular housing that any new site would be surrounded with high fences, security lighting, and 24/7 security guards. Renee said modular housing is organized to isolate and contain low-income people. “They even keep family members out,” she said.

Many people have already been evicted from the Royal Crescent site, and residents complain that their Residential Tenancy Act rights have been completely disregarded by Coast Mental Health. Sean, another former resident of Anita Place, explains why supportive housing does not work: “I don’t want there to be staff where I live. I don’t want to be watched constantly. I don’t like people telling me what I can or can’t do at my own place.”

Where are we supposed to go? The prisoncampification of Anita Place

The Province’s offer is a temporary solution that still leaves people with nowhere to live for the next five months. With the emergency shelter closing on March 31st, and the city barring access to Anita Place and demolishing homes there, where are people expected to go? Mayor Mike Morden, whose heavy-handed, authoritarian approach to the camp, which has won him the nickname of “Warden Morden,” has installed a checkpoint at a gate around camp. Morden has barred 38 out of the 50 residents who were living there at the time he evacuated the camp under the guise of fire safety, two weeks ago. The Province should condemn Mayor Morden’s prison-campification of Anita Place, so that it can once again be a self-organized community, offering shelter and sanctuary to all homeless people.

Band-aid on a crisis

Why does the Province continue to offer inadequate, institutionalized, temporary solutions to a crisis that needs to be addressed at its roots? Last summer, there were over 100 people staying at Anita Place. The Province’s omission of any permanent social housing in its announcement shows that the BC NDP government is following the precedent set during the 16 years of BC Liberal rule and organizing homeless people to suffer the endless cycle of living in shelters and on the streets. Rather than develop social housing to break the ongoing crisis of market rental housing insecurity, evictions, and homelessness that is faced by tens of thousands of people in British Columbia, the BC NDP is treating homelessness as an individual problem, signified by the visible resistance of homeless people in tent cities. Minister Robinson’s announcement will take some of those homeless leaders off the street. Alliance Against Displacement organizer and longtime supporter of Anita Place listen chen said, “Modular housing combats the crisis of public relations caused by homeless people organizing, rising up, and refusing to remain invisible. It’s a way to manage, cover up, and continue our crisis of housing and homelessness.”

Evictions from apartment buildings that are renovicted, demovicted, or just too expensive will continue to push hundreds and thousands more into homelessness. And people will surely be evicted from modular housing for breaking arbitrary rules. If the government uses modular housing as a justification for closing down Anita Place, newly-homeless people will, once again, have nowhere to go. Sean says, “if they’re not offering permanent housing, if they’re not willing to do that, then it’s just the same problem continuing that they’re going to have to keep dealing with and blowing money on. Why not just buck up right now and not force a tent city number three? People will pick a tent city over the modulars if they’re too strict.”

Anita Place residents renews their call for solutions not coverup

In response to the Province’s announcement, Anita Place community members renew their call to be at the head of the table in planning permanent social housing and social programs for low-income people in Maple Ridge. The Province has the resources to end homelessness in BC, including Maple Ridge. It can start with purchasing the Econolodge immediately as interim housing, and then purchasing the St. Anne apartment building across the street from Anita Place to create new, permanent, tenant-controlled social housing.