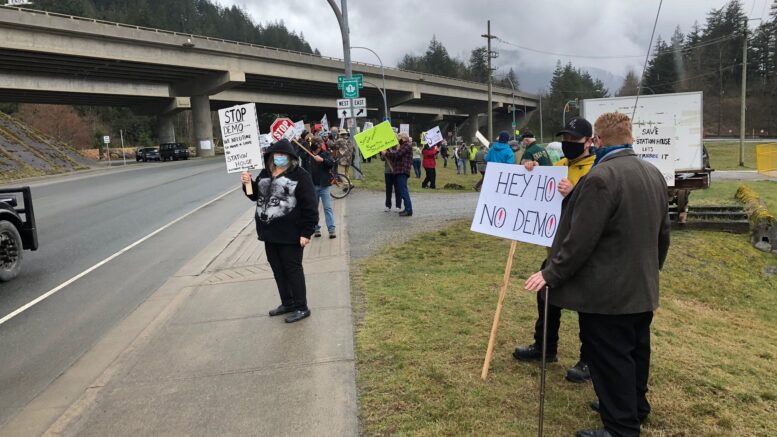 Hope – It was a small yet vocal protest of some 40+ people who don’t want to see the wrecking ball demolish the legendary Hope Train Station. The BC Ombudsmen stepped in to see if discussions between the District and the Ministry of Transportation and other stakeholders, was done through due diligence.

The protest was Saturday March 20.

While this has been a contentious issue over the past few months, one organizer who wanted to remain anonymous, sadly told FVN that he fears the demolition will go as scheduled on Tuesday March 23.

Barry Stewart with the Coalition for the Preservation of the Hope Station House addressed the crowd. Some 2200 signatures have been signed to the petition to save the building with another 60 letters of support sent to the District. Organizers complain that their voices fall on deaf ears.

The one hour protest was drenched in a typical Spring Hope drizzle. It is hoped (Pardon the pun) that the building can be saved and moved to a site, literally blocks away and become a new visitors centre (See photo below).

From Save the 1916 Hope Train Station House:

What a day! It was so great to see so many people out in the rain, supporting the Hope Station House. For anyone who hasn’t yet written an email to the mayor and council, please consider doing so. Check out the final section of our FAQ on our website where you’ll find a template email alongside all the contact details at the District of Hope. Now is the time to keep up the pressure on those who can reverse their decision to demolish OUR heritage.To everyone who showed up today whether on foot, on a bike or in a car – THANK YOU THANK YOU for creating such a positive atmosphere!https://www.savethehopestationhouse.ca/documents/faqs.pdf

Fate of Hope Train Station May Be Decided Monday Night