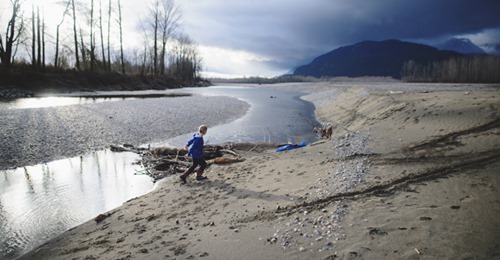 Fraser Valley – Recently there has been the renewed concern about ATV activity at Gill Bar and other sensitive eco-systems. The continuing concern is the damage done to fish stocks and the environment in general. There has been a call for a moratorium on ATV’s on any gravel bar. Sadly there have been cases where signs asking drivers to be careful, have been vandalized.

Watershed Watch Salmon Society and Chilliwack Citizens for Change have issued a statement on these concerns.

Over the last few weeks, there has been considerable news reporting on reckless ATV and truck off-roading activities in an extremely sensitive section of the Fraser River near Chilliwack known as the “Heart of the Fraser”.

A widely-shared video depicts a rally of trucks senselessly charging through an area teeming with salmon redds. This is unacceptable.

The Heart of the Fraser includes channels, islands and wetlands that support all Fraser River salmon, endangered sturgeon and many other species.

In response, DFO posted new signage stating that “the use of recreational vehicles in fish habitat is prohibited.” The signage was torched and vandalized.

Watershed Watch Salmon Society, in partnership with the Outdoor Recreation Council of BC and BC Wildlife Federation, have formally requested that DFO designate the Heart of the Fraser area an “Ecologically Significant Area” under the federal Fisheries Act and that special vigilance on the un-diked islands be legislated.

Read our full letter to the Minister of Fisheries here.