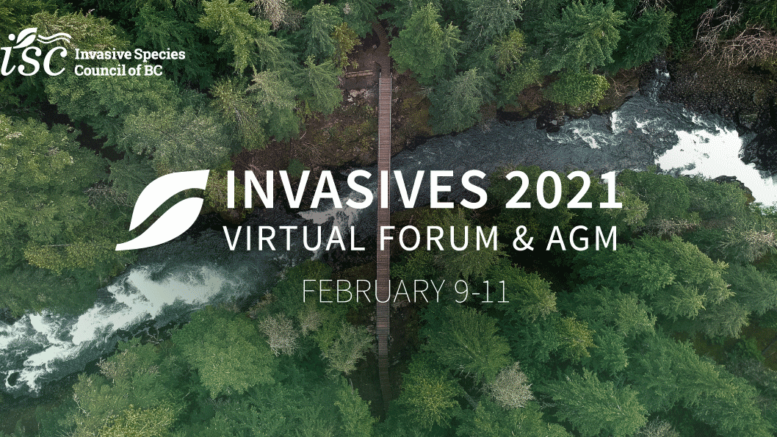 Victoria/Fraser Valley – Delegates from across British Columbia and the Pacific Northwest will gather virtually February 9-11 to share how to best manage, control and prevent invasive species from further creating damage to the environment and the economy. The 16th anniversary forum, INVASIVES 2021, is presented by the Invasive Species Council of BC (ISCBC) and features speakers on best practices from around the world, workshops, learning sessions, and discussion on what is being done to target invasive species.

Some highlights from this year’s sessions include: Keynote address by Dan Tompkins of New Zealand’s Predator Free 2050 to talk about his country’s mission to eradicate invasive predatory mammals threatening native biodiversity; Matt Miller of the Nature Conservancy on communicating about invasive species in an era of information overload; Antonio DiTommaso of Cornell University on how climate change is affecting the migration of weeds; Omar Akbari from UCAL San Diego on how gene editing may lead to a major reduction in the use of insecticides; Presentations on emerging issues in BC, including Asian giant hornets and invasive goldfish.

Damages and economic losses caused by invasive species worldwide are estimated at more than $1.4 trillion – nearly five per cent of the global economy. Forestry, agriculture, fisheries, and the recreation and tourism industries are some of the most heavily impacted, with millions in lost revenue each year.

INVASIVES 2021 – 16th annual forum about invasive species in BC

About the Invasive Species Council of BC

The Invasive Species Council of BC (ISCBC) is dedicated to keeping our landscapes and communities free of invasive species. It provides a coordinated, province-wide approach to reducing the impact of invasive species in B.C. ISCBC unites efforts across the province and collaborates with a variety of partners to develop unique solutions for the wide variety of ecosystems across B.C.