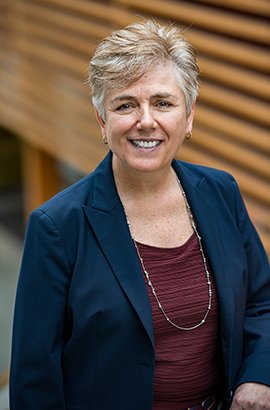 Fraser Valley – Dr. Joanne MacLean, President and Vice-Chancellor at the University of the Fraser Valley since 2018, has been named to the board of directors for U SPORTS, the national governing body for university sport in Canada.

“I am truly honoured to have this opportunity to serve the interuniversity sport community,” MacLean said. “U SPORTS is a tremendous sport organization in Canada, centred around the success of student athletes. It is a great reminder of why I chose to work in higher education. This is truly a chance for me to give back to my roots, and in a way, it feels like I have come full-circle in my career.”

In addition to her strong resumé in academics and administration, MacLean’s expertise in the world of sport makes her uniquely qualified for this new role.

MacLean spent 11 seasons as women’s basketball head coach at the University of Windsor, winning three Ontario University Athletics (OUA) coach of the year awards, and then went on to serve as athletic director at Windsor for a further six years.

She participated as a coach and administrator at three World University Games, and was Canada’s Chef de Mission at the same event in 2003 in South Korea. She has also served on the board of Canada Basketball.

MacLean’s academic pursuits are also closely linked to sport. She earned her undergraduate and master’s degrees in physical education at the University of New Brunswick in her hometown of Fredericton. She holds a PhD from Ohio State University, where she studied human resource management in sport and recreation, and administration in higher education.

MacLean is the author of two books and over 70 peer-reviewed publications and presentations, and her research interests include human resources and performance management, sport governance, and the Canadian sport system. She was named a Research Fellow of the North American Society for Sport Management in 2009.

“We are thrilled that Joanne has been appointed to the U SPORTS board of directors,” said Steve Tuckwood, UFV director of athletics and campus recreation. “She has been in every role, from student athlete to coach to athletics administrator, to senior university leadership. She is well-positioned to understand the challenges and opportunities for student athletes participating in U SPORTS.”

For a complete listing of U SPORTS board members, visit usports.ca.

Be the first to comment on "UFV President Dr. Joanne MacLean named to U SPORTS Board of Directors"