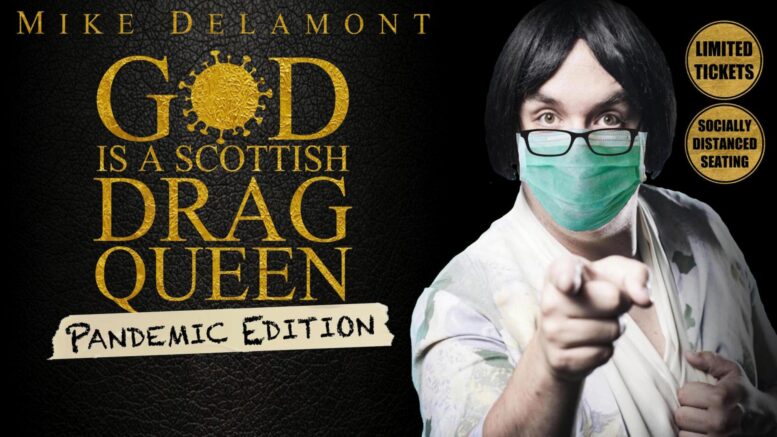 Chilliwack — God, dressed in a floral power suit and with a heavy Scottish brogue, returns to Chilliwack to skewer everything COVID related from hoarding toilet paper to hand sanitizer in God is a Scottish Drag Queen: Pandemic Edition. On November 6, critically acclaimed Canadian comedian Mike Delamont will have you howling with laughter in an unforgettable evening of pandemic comedy! Seats are limited due to social distancing protocols. Get your tickets soon so you don’t miss out on this gut-bustingly hilarious performance.

“The goal for me is to be able to talk about important things, but these things have to be funny,” says Delamont. “I could talk about big things, but the show is certainly not heavy. It’s nice to put things through a comedic lens like that.”

Since starting stand-up comedy in 2011, Mike Delamont has had a huge amount of success within his career, performing across North America in places like the Rio Hotel & Casino in Las Vegas, and Upright Citizens Brigade in New York. Just two years after he began, he was nominated for a Canadian Comedy Award for Break Out Comedian of the Year. The following year he made his television debut with two gala performances for the Halifax Comedy Festival, as well as taped a set for the world renowned Just For Laughs Festival in Montreal. He is a three-time Canadian Comedy Award nominee, and has been nominated twice for the Just For Laughs Best Comedy Award. He is an eighteen-time winner of the Best of the Fest award at various Fringe Festivals and is the top grossing comedian on the international fringe circuit.

“The show is more about society and life. There’s a lot of fodder for it,” says Delamont. “It’s a bigger and better version. You don’t have to have seen the first two show to see this one. It’s an entirely different show.”

This night will be one that will have the whole theatre roaring with laughter, so don’t miss two chances to see Mike Delamont’s unforgettable God is a Scottish Drag Queen – Pandemic Edition, with a performance at 7:00pm and again at 9:30pm. It’s one show that no comedy fan should miss!

All performances will be held under the current public health order and are limited to fifty patrons. Seating is spaced out with a maximum bubble size of six patrons, and all audience members must wear a mask when not in their theatre seats. If you would like to know more about our enhanced operating protocol and CODIV-19 safety plan, you can view it on the Chilliwack Cultural Centre website.

Be the first to comment on "God is a Scottish Drag Queen: Pandemic Edition – Cultural Centre – Two Shows – November 6"