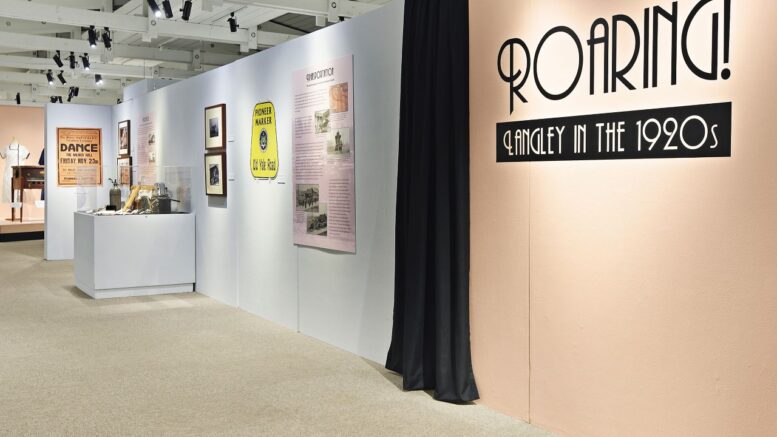 Langley – “The Roaring Twenties” is a term that conjures up prohibition rumrunners, flappers, gangsters, and gun molls.  But how accurate is this depiction?  What would life really have been like for Langley’s residents during this iconic era?  The Langley Centennial Museum’s latest exhibition, Roaring! Langley in the 1920s, which can currently be visited virtually, aims to answer these questions.

In 1920, the world was reeling from years of unrest.  The First World War had ended in November 1918.  There had been several strikes, violent uprisings, revolts, and revolutions around the globe, both during the war and in the years following it.  On top of this turmoil was a worldwide pandemic of the H1N1 Influenza virus, dubbed the “Spanish Flu,” which began in 1918 with waves continuing into 1919 and 1920, killing almost twenty million people.

Despite all of this, the new decade might have seemed like a fresh start to many.  While losses of the recent past were still close to countless hearts, many set their sights on a new future, looking ahead to peace, prosperity, and the pleasures that came with modern living.  Influences from our southern neighbour, including the Jazz Age, the rise of Hollywood, and even American Prohibition, have influenced how we think about this era today, and would have indeed had an impact on Langley residents then, in varying degrees.

Historians have written accounts of the decade, and the museum’s collections include artifacts, archival materials, photographs, and oral histories that bring the years to life.  Roaring! Langley in the 1920s examines and interprets those items to provide insight into what Langley life would have been like a century ago.

While the exhibit shines a light on the rise of convenience items, buying on credit, flappers, and the beginning of Hollywood’s influence, it also shows the importance of our local community halls and schools, our early midwives, nurses, and doctors, and spotlights the Langley Prairie fire of 1928.  The exhibit also highlights the ways in which the decade did not “roar” for everyone: residential school attendance became compulsory for Indigenous children, the Chinese Exclusion Act was passed, the Ku Klux Klan set up in Vancouver, and the local White Canada Association and farmers’ institutes, like others around the Fraser Valley, pushed for the exclusion of Asian people from land ownership.

While the museum remains closed, Roaring! Langley in the 1920s can be visited virtually at museum.tol.ca.  For more information, please contact [email protected].