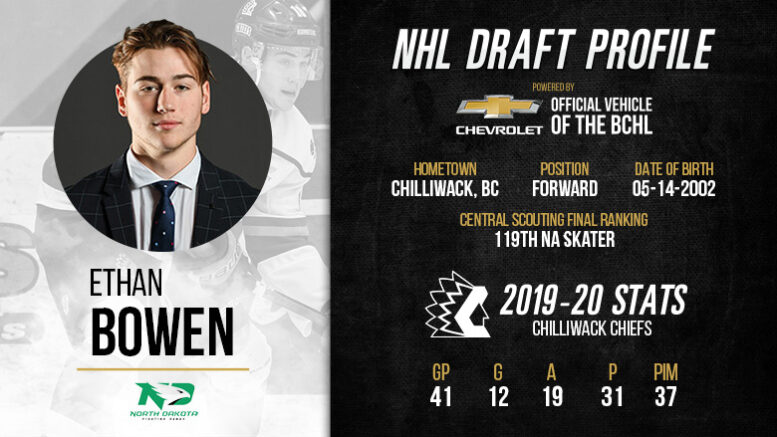 Burnaby/Chilliwack – The 2020 NHL Draft was held virtually this year on Oct. 6 and 7 and, like most years, the BCHL will be well-represented.

This year’s highest-ranked prospect from the league is Chilliwack Chiefs forward Ethan Bowen.

The 18-year-old Chilliwack native is entering his third full season with his hometown Chiefs before he heads off to the University of North Dakota next year.

Bowen was ranked as the 119th North American skater by NHL Central Scouting in their final rankings.

Now, he has been drafted by the Anaheim Ducks, 7th Round, 207th overall.

Plus, Kris Draper, director of amateur scouting for the Detroit Red Wings, talked about the moment his team selected his son and #ChwkChiefs forward Kienan during Wednesday’s NHL draft.

Chiefs, Rivermen Start Round One Of BCHL Playoffs – March 1

Chiefs Busy Hiring In The Off Season