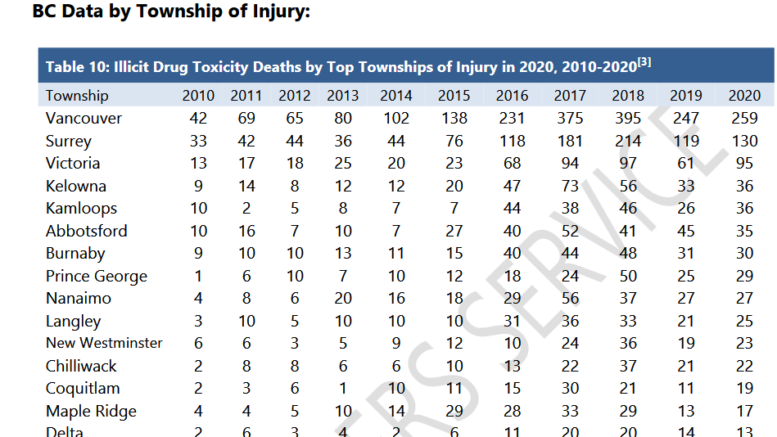 Victoria/Fraser Valley – It is the broken record on repeat, another bad month for OD Deaths in BC.

Chilliwack has already surpassed their 2019 numbers, Abbotsford is on track to do the same.

Once again, post-mortem toxicology testing data published in this most recent report suggests an increase in the number of cases with extreme fentanyl concentrations (exceeding 50 micrograms per litre) in April, May, June, July and August 2020 compared with previous months. From April to August 2020, approximately 14% of illicit drug deaths showed signs of extreme fentanyl concentrations compared with 8% from January 2019 to March 2020.

There have been 1,068 illicit drug deaths to date in 2020 in B.C., based on preliminary data. The total number of illicit drug deaths in the first eight months of 2020 have surpassed the total for all of 2019. The number of non-fatal overdose incidents has also increased significantly. BC Emergency Health Services reports close to 7,500 overdose calls throughout B.C. this summer, making it the highest number of overdose calls ever recorded in a three-month stretch.

Latest Illicit Fatal OD Numbers In BC – Over Two People A Day Die From OD’s – Abbotsford, Hope Are Concerns