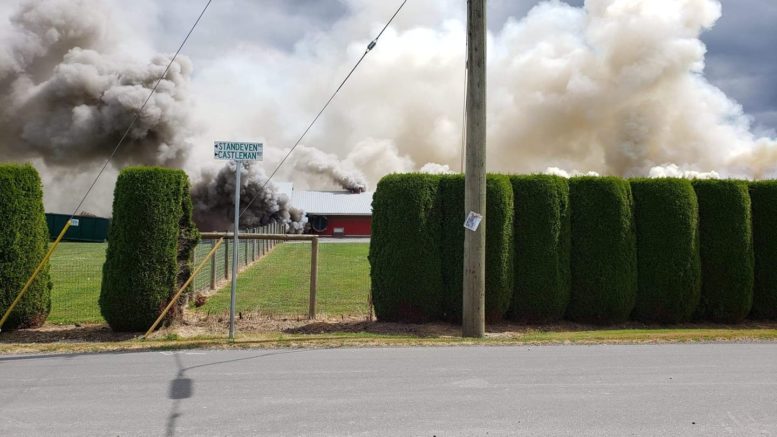 Chilliwack – Just after Noon on Friday, Chilliwack Fire responded to a chicken barn fire on Castleman Road. The smoke could be seen on Highway 1 near Prest Road.

While fire crews were working a structure fire (arson) on Rowat Avenue, Chilliwack Fire Department was dispatched to a second structure fire located in the 49000 block of Castleman Road. The structure fire call came in at approximately 12:30 pm.

Fire fighters responded from Halls 1, 2, 3, 4, 5 and 6. On arrival, fire crews witnessed heavy smoke and flame from a large poultry barn. The barn sustained heavy fire damage and was destroyed in the fire. An excavator was brought in to help with firefighting operations. Fire crews did a great job protecting adjacent buildings on site.

The farm is a free-range poultry operation. The majority of the chickens were outside the barn at the time of the fire and were later collected and move to a neighbouring barn. Unfortunately, a few of the chicken’s that were in the barn perished in the fire.

The fire is under investigation by Chilliwack Fire Department and appears to be accidental.