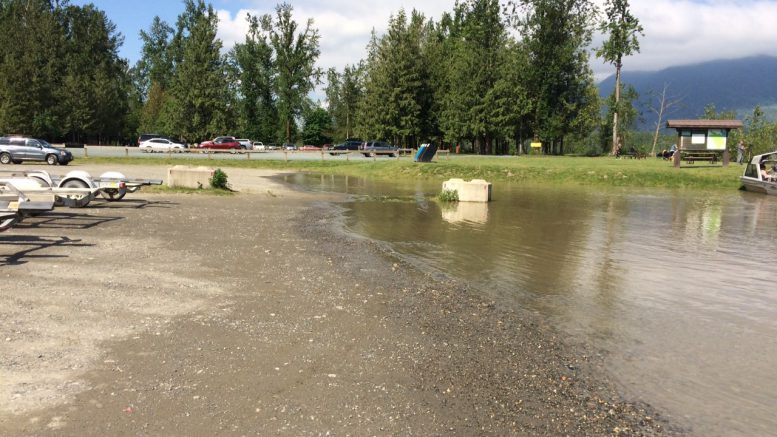 The River Forecast Centre is maintaining a High Streamflow Advisory for:

The combined influences of seasonal snowmelt and rainfall across the Thompson and Fraser watersheds this month and last week has led to high flow conditions in the Fraser River.
Most recent observations are:

Based on the weather forecast for the upcoming week, expect flows to level off and begin to gradually recede for the Fraser River at Hope and at Mission.  However, the river is vulnerable to a localized heavy rainfall in the Lower Fraser that could increase flows from local tributaries like the Chilliwack River, Harrison River and Coquihalla River. If another heavy rainfall event occurs in the headwaters of the Upper Fraser, Cariboo and North Thompson it would take approximately 3-5 days for that pulse of water to eventually peak flows in the Lower Fraser Valley. Weather forecasts show continued unsettled weather patterns for the upcoming week.

There is little expectation for the Lower Fraser River to reach substantial flood levels (gauge level at Mission > 6.4 m or flow at Fraser River at Hope > 11,000m3/s).  However, since the river is flowing at the highest level recorded this season thus far, it is vulnerable to any heavy basin-wide rainfall event over the next two weeks.