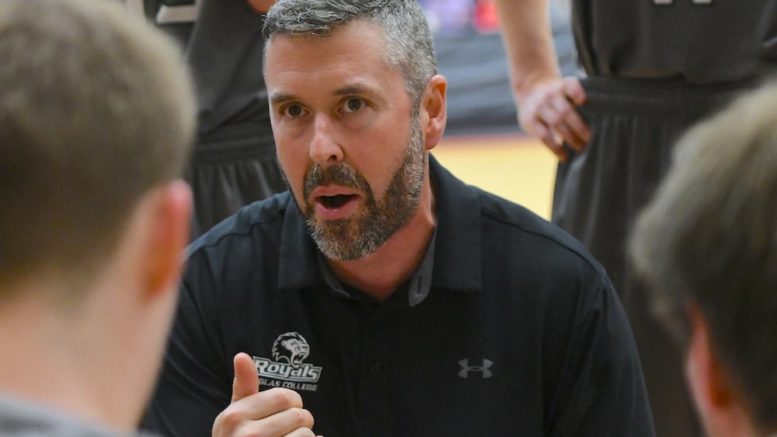 Abbotsford – The University of the Fraser Valley athletic department introduced Joe Enevoldson as the new head coach of the Cascades men’s basketball program.

Enevoldson joins UFV after a highly successful tenure at the college level with the Douglas Royals.

Back in February, in a tersely worded media release, UFV and their Basketball Coach Adam Friesen were parting ways with no reason given. Ironically, it was Friesen who turned the club around.

“Joe is a proven coach who has taken the Douglas College program to another level,” said Steve Tuckwood, UFV director of athletics and campus recreation. “We also know that he has strong connections with basketball development in the province of British Columbia, and we’re excited to have him come and join us.”

Enevoldson guided Douglas to PACWEST medals in each of his four years on campus – bronze in 2016-17, gold in 2017-18, silver in 2018-19, and gold in 2019-20. His Royals qualified for the CCAA national championships in two occasions, winning silver in 2018 and earning the No. 1 overall seed heading into this year’s tournament, which was cancelled due to the COVID-19 pandemic. Enevoldson posted a 50-22 record in league play, and was voted the PACWEST coach of the year each of the past two years. He also earned CCAA national coach of the year honours this season.

During his time at Douglas, Enevoldson worked concurrently as director of male high performance for Basketball BC, hiring coaches and identifying and communicating with potential Team BC athletes.

While UFV represents Enevoldson’s first Canada West/U SPORTS men’s head coaching post, he has extensive experience as an assistant coach at this level. He served as a men’s assistant coach with the UBC Thunderbirds (2003-04), and had stints as a full-time assistant with the Thompson Rivers WolfPack (women’s team 2005-06, men’s team 2013-15). He also has head coaching experience on the women’s side with Southern Alberta Institute of Technology (2006-07) and Mount Royal University (2007-13), helping the MRU Cougars make the jump to Canada West in 2012-13.

Enevoldson holds Bachelor of Arts (geography major) and Masters of Business Administration degrees from Thompson Rivers University, and the four C’s of classroom, community, court and communication are pillars of his coaching philosophy.

“It’s a dream job,” Enevoldson said. “To coach at the U SPORTS level, the highest level of amateur sport in Canada, is exciting. I’m ecstatic about the opportunity to get back to that level and coach in a day-to-day scenario against some of the best coaches and athletes in the country.

“I plan to bring a culture that I believe is conducive to personal and athletic growth. I truly do believe that the holistic student-athlete is the best student-athlete. My goal will be to win the community, and to build a program that the Fraser Valley is proud of.”