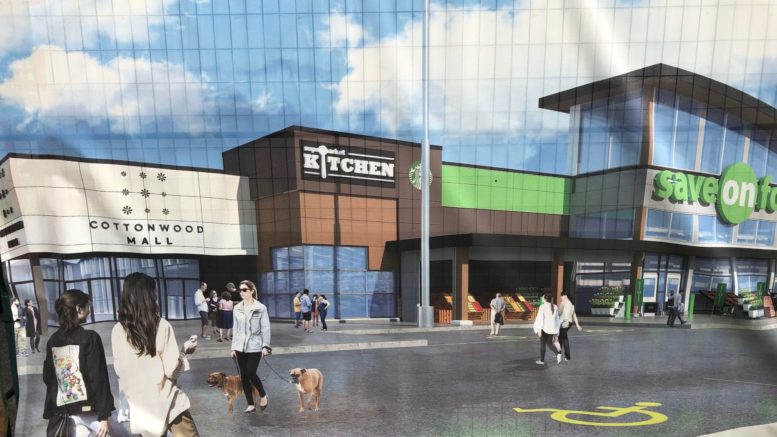 Chilliwack – UPDATE – APRIL 8, 2020 – The new Save On Foods is taking shape at Cottonwood Mall. Old Navy along with two other stores to be named later this year, will fill the footprint left behind from the old Target/Zeppers.

ORIGINAL STORY – AUGUST 6, 2019 – On the heels of the major announcement that the Chilliwack Mall will ask Chilliwack City Council for the various permits and permission to drastically change the look of that mall, including adding condos and rental, comes the change across the street.

At Cottonwood Mall, demolition teams have been at work for a few months, gutting what once was the Target store and before that, Zellers.

After Vancouver-based PCI Developments bought the mall from Ontario-based Morguard, the facelift has gone into high gear.

The construction fencing has eaten up more parking lot and the heavy equipment taking down a large chunk of the mall.

The old Target/Zellers will not be used for a brand new Save-On Foods, however 38,000-square-feet of new retail space is very impressive. A 6,000-square-foot pad in the south parking lot will be set aside to accommodate two additional tenants. In a perfect world, this should attract new retailers to the mall. Like its counterpart across Luckakuck, the mall has been a little too quiet for fellow retailers.

Recently, Teresa Laynes has taken over as Marketing Manager for Cottonwood Mall. She was in the similar capacity with Hoffstead’s and before that, Program Director and Promotions for Star FM.

PCI have stated that a late 2020 opening date is still on track.

Rona And Cottonwood Mall Break Up Before The Marriage