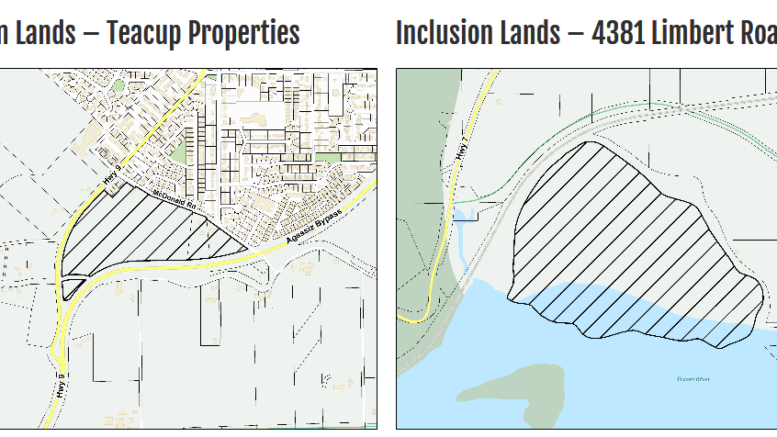 Kent – After discussions with the Agricultural Land Commission (ALC), the District collaborated with local developers / property owners to create an updated exclusion proposal for the designated Residential-Reserve teacup lands. The proposal is balanced with Kent’s agricultural values and vision for sustainable growth.

The application will only be submitted to the ALC for its decision if it is supported by Council.

A public meeting was scheduled for Tuesday March 10 at Friendship House (7272 Morrow Rd). Since the COVID-19 related cancellation, social media concern ramped up on this issue to the point where the Mayor Sylvia Pranger issued an open letter.In part it reads:

ALR Land Exclusion Meeting – March 10, 2020
I listened to your comments at the March 10th public meeting and some of you made it very clear that you want to protect the land that is being proposed to come out of the agricultural land reserve (ALR).
A little bit of the development history of our community. When we moved here, the only streets that were really built on were Agassiz Avenue, Morrow and Vimy Roads and along the highway and the Heath Road area, but things were changing.
I’m not sure if the farmer’s name is correctly spelled but to the best of my knowledge, it was called the Krepakavitz farm. We knew it as the cabbage patch. So, if you live on Oakwood, Fraser, Kalyna or Beechwood, you are living on farmland. But you say that is a long time ago. Later there was development of the Westlin farm. If you live on Bristol, Sheffield, Canterbury or York Crescent then you live on the Westlin farm. And later, if you live on Elm or Prasmount that was the Schep farm. All of these lands were Class 1 farmland.
Where McKay Crescent is now was Mr. Sterling’s hobby farm and Agassiz Bakery.
When you drive down Morrow, you see several townhouses where there once were large properties with big gardens and Ingrid’s hobby farm.
The Local Government Act mandates all municipalities to be part of the regional growth strategy. The purpose of regional growth strategies “is to promote human settlement that is socially, economically and environmentally healthy, and that makes efficient use of public facilities and services, land and other resources”.
The Official Community Plan is a bylaw passed by Council after much consultation with groups and members of the public over an extended period of time. The latest bylaw was passed by a unanimous vote in 2014. This is the legal framework for planning any community and can only be changed by amending the bylaw through Council.
The OCP which included the proposed exclusion land has been reviewed and adopted both in 2001 and 2014 by two separate Councils who approved its designation of residential reserve.
Like you, I would also like to keep all the land in agriculture; however, the District of Kent has numerous committees and, as Mayor, I am obligated to listen to the other committee groups and agencies and their needs for this community as well.

Growth Management Principle – Growth in the District of Kent will be managed in order to strengthen the community both socially and economically, preserve the natural environment, protect valuable agricultural land, and to maintain Kent’s rural charm.

The District of Kent has created an interactive story map for the updated ALC Exclusion Proposal. Use this tool to learn about the District’s vision for a complete community that balances agricultural values with needs for affordable housing.

4:15PM Tuesday Update On State Of Emergency In District Of Kent

Be the first to comment on "Updated: ALC Exclusion Proposal (TeaCup Lands)- Learning More About The Vision for the District of Kent – Mayor’s Open Letter To Community"