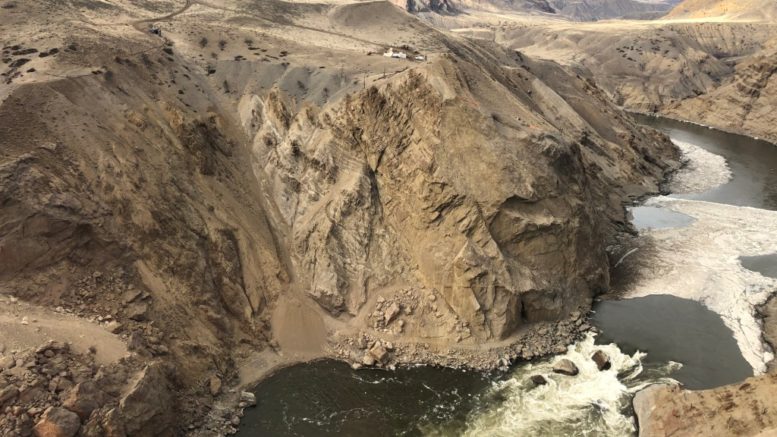 Big Bar/Lillooet – In 2019, Mother Nature showed her fury and power with a slide, blocking the path for fish stocks on the Fraser River at Big Bar. Panic set in as a mammoth effort started. Trying to physically move spawning salmon around the slide area. First Nations and recreational fisherman demanded serious action.

Blasting seemed to be the only clear way of fixing the problem.

According to a statement this past week from DFO, that is exactly what happened.

Peter Kiewit & Sons successfully carried out a planned blast at the East Toe. Kiewit also made solid progress on the construction of an overland road for heavy equipment, on the installation of a highline to facilitate site access and on rock fall prevention.

The East Toe blast, which took place on February 18, removed a large portion of bedrock extending into the river at the site of the slide. The result is a widened channel and more flow directed toward the east river bank. Acoustic monitoring downstream of the slide did not detect any fish in the area before the blast and no fish mortality was detected.

Drilling on the East Toe will now resume in preparation for a second blast in early March, depending on the weather. Scaling, rock fall protection measures and daily geotechnical monitoring continues to occur as worker safety is always of utmost importance.

The Government of Canada, the Province of British Columbia and First Nations continue to work in partnership to oversee progress at the Big Bar landslide site.

Dean Werk , President of the Fraser Valley Salmon Society and owner/operator of Great River Fishing Adventures in Chilliwack told FVN that they receive weekly updates from DFO. So far they are pleased with the progress. Last summer, Werk and Gadsden were vocal on how the blockage was affecting salmon stock and recreational fishing in general. The annual AGM for the FV Salmon Society is this April.

“It can also be said anytime that we (FVSS) are concerned for all user groups as we work alongside and with First Nations and Commercial, said Werk.

Our newly formed FRCT (Fraser River Collaborative Table) made up of First Nations, Commercial and the Recreational representatives has been meeting for over 1 year now. This group is independent from Government presence at this time.

We have also secured dates for the 4 next meetings – next one is April 20/2020 and the other 3 will take us up to Jan 2021 – very exciting to have this commitment from all user groups.
The FVSS has a seat at this table and I usually am the representative attending on our behalf.
In December we all came together to write a letter of concern to the Federal and Provincial Government asking for immediate attention to be given to clearing the slide at Big Bar – all user group signed this letter.

At the end of January we completed our joint LOU (letter of Understanding) for the group. These are big steps to the future of the crisis that is upon us. There are so many challenges facing our Wild Salmon and Sturgeon for the future that it is imperative, we all come together and work to give the fish the best chance.

We are starting efforts on the TOR (Terms of Reference) but this will be a slow process and we are all happy with that approach. This is a learning experience for all of us at the table and we are confident we can work together to make some solid decisions regarding fish for the future generations.