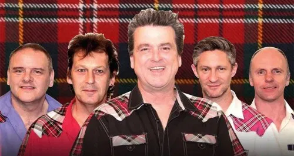 The soundtrack of a generation arrives in Chilliwack when Les McKeown’s Bay City Rollers take to the stage Sunday March 22.

Selling over 300 million albums worldwide, The Bay City Rollers attracted fans of all ages and a phenomenon known as Rollermania swept across the globe.

Now, Bay City Roller legend, Les McKeown, has brought together a powerful group of talented musicians who embody the same essence of the original band that the world knew and loved. With their catchy hooks and tartan pants this legendary band has produced some of the most iconic songs, like “Saturday Night”, “You Made Me Believe in Magic”, and “Shang-a-Lang”.

Come journey back in time to those carefree days of the ’70s when Scotland’s original boy band ruled the charts with some of their greatest hit songs, and you’ll be reminded why they had audiences screaming themselves hoarse in excitement.