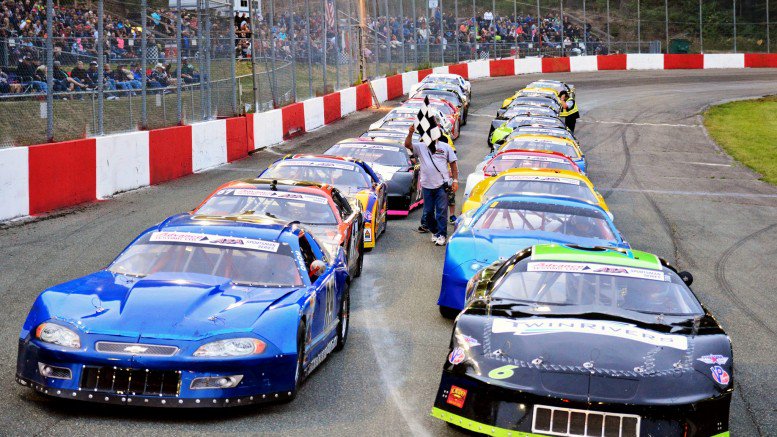 Agassiz – 50 years ago, a few racers with a need for speed in Agassiz/Kent, held a meeting. Racing in the Valley has never been the same.

On New Year’s Day, the 2nd annual celebration/New Year’s bonfire and weenie roast was at the track. (See pictures below)

Pat Shepanowsky with Agassiz Speedway is making a public call for info and pictures of the early days of “Kent” Speedway and they will be placed on the updated website.

The 2020 Schedule for the 50th year of racing has been posted and can be found here.

The website is here, including this past year’s trophy winners.

The track was originally constructed for the fun and enjoyment of racers and spectators. The first race at the current location, was held in June of 1971 .  The track was a 2/10 of a mile  dirt/ dust  track.  A total of 12 cars competed on the clay/dirt oval, of those nine cars were station wagons. The first three years of racing were run, if and when, cars were available and if the weather cooperated. the track was a very rough one quarter mile oval, with no banking, no guard rails and very little spectator seating.

In 1974, the track was upgraded. It was widened by 40 feet and graded regularly. Clay was trucked in and a water truck was acquired to subdue the dust.

In 1978, the club embarked on a very ambitious project – to pave the track to an elevated one quarter mile oval track, 55 feet wide with a depressed pit area in the center.

A  Lottery grant in 1988, helped to erect new bleachers and a concession stand.

The track was expanded in the fall of 2000, to a true 1/4 mile paved oval.  The track was extended west of the No 1/2 corner ( Porayko’s corner).  The new enlarged pit area allowed for an on/off lane.  Traffic lights at the flagstand and Cover 3 were installed and new washrooms were constructed.

Improvements have continued at the facility, with new cement walls added.  Then in 2003, true ‘night time’ racing under the lights was introduced.  Generators were used to power the lights, as the area was not serviced by Hydro Lines.

Hydro was eventually obtained, so crews no longer rely on generators.

DID YOU KNOW – originally there was only one class of cars, Hobby Stock, the equivalent of the current Street Stock class.   Over the years, they have continued to add classes, including Late Model, Hornets, Midgets.  They have also welcome visiting classes such as WESCAR Late Model Touring Series, Mini Outlaw, WMRA and more .

Saturday Night Racing Under The Lights In Agassiz

Be the first to comment on "UPDATE – 2020 Schedule Posted For 50th Anniversary of Agassiz Speedway – Organizers Looking For Early Artifacts, Pictures"