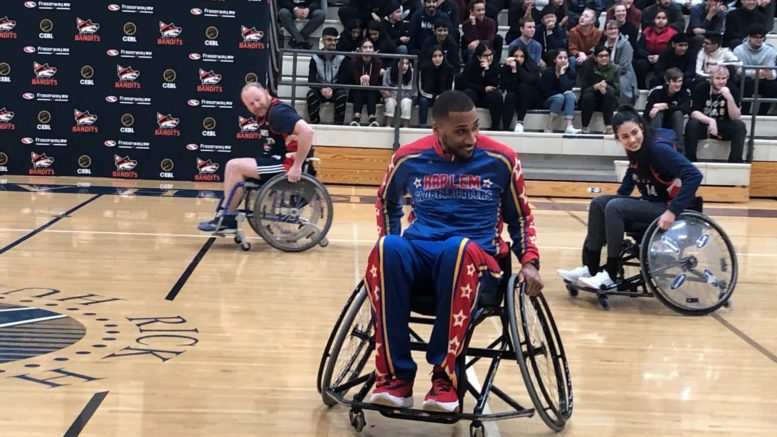 Zeus McClurkin of the Globetrotters

Abbotsford – Madness and a lot of fun. If you have ever seen the Harlem Globetrotters in person, you know it’s mayhem on the court. Take one ‘Trotter, add a few university and college players and put them up against wheelchair athletes who actually know what they’re doing on the court, then sit back and enjoy the show.

Like we said, madness and a lot of fun.

The Fraser Valley Bandits and Abbotsford Centre partnered with the Harlem Globetrotters to host a Celebrity Wheelchair Basketball Game at Rick Hansen Secondary School in Abbotsford on Tuesday.

Zeus McClurkin represented the Harlem Globetrotters and brought his full bag of tricks to get fans excited for the team’s upcoming stops in B.C. as part of the Globetrotters’ Pushing the Limits World Tour, which features a performance at Abbotsford Centre on January 31, as well as stops in Vancouver on February 1 at Pacific Coliseum and Nanaimo on February 2 at VIU Gym.

Did we mention the fun?…and the motivational speaker that is Zeus!