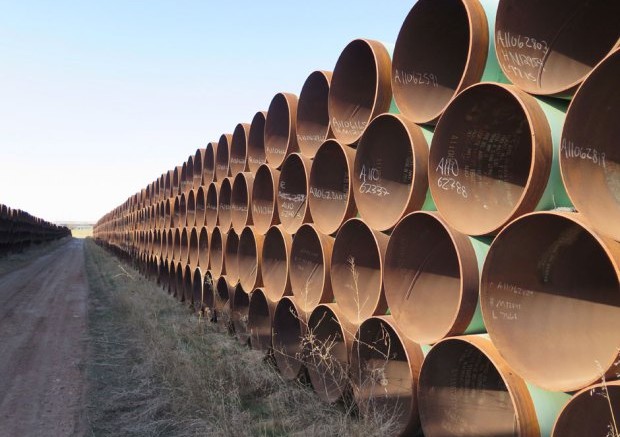 Ottawa/Victoria/Calgary (with files from CP/BNN/Bloomberg) – The Supreme Court of Canada shut down British Columbia’s attempt to regulate what can flow through an expanded Trans Mountain pipeline from Alberta.

The B.C. government wanted to require provincial permits before heavy oil could be shipped through pipelines in the province.

In 2018, it asked the B.C. Court of Appeal if such permits were in bounds. Last May that court said no, ruling they would violate Ottawa’s authority under the Constitution to approve and regulate any pipeline that crosses a provincial border.

On Thursday, the Supreme Court agreed.

“We are all of the view to dismiss the appeal for the unanimous reasons of the Court of Appeal for British Columbia,” Chief Justice Richard Wagner said.

The decision was issued from the bench after several hours of hearings Thursday in Ottawa.

It removes one of the remaining obstacles for the Trans Mountain pipeline expansion, which seeks to twin an existing pipeline running between Edmonton and Burnaby.

The twinned pipeline, with roughly twice the capacity of the original, would carry only diluted bitumen, a heavy crude produced in Alberta’s oilsands. The existing pipeline is to continue to ship mainly refined petroleum products like gasoline, and light crude.

Premier John Horgan and George Heyman, Minister of Environment and Climate Change Strategy, have issued the following statements in response to today’s Supreme Court of Canada ruling regarding the Trans Mountain Expansion Project:

Premier John Horgan “Clearly, we are disappointed by the decision, but this does not reduce our concerns regarding the potential of a catastrophic oil spill on our coast.

“Our government takes our responsibility to defend the interests of British Columbians seriously. When it comes to protecting our coast, our environment and our economy, we will continue do all we can within our jurisdiction.”

“The Province has been reviewing the conditions attached to the provincial environmental certificate as directed by the B.C. Court of Appeal’s decision last fall. Today’s decision provides some further context for that work.

“We remain concerned about the risks posed by diluted bitumen, and we will continue to do all we can to defend our environment, our coast and the tens of thousands of jobs that rely on them.”

The Canadian Taxpayers Federation released the following statement in response to the Supreme Court of Canada’s rejection of the Government of British Columbia’s challenge to the expansion of the Trans Mountain Pipeline:

“We welcome this swift and clear decision by the Supreme Court of Canada, upholding federal jurisdiction over interprovincial infrastructure such as pipelines,” said Kris Sims, B.C. Director of the Canadian Taxpayers Federation.  “Getting our natural resources to market is essential to the wellbeing of our country as those industries help to pay for the many taxpayer funded programs that we depend on in Canada.”

Based on data from the Parliamentary Budget Office, the CTF has found that by not having our full pipeline capacity to get our Canadian oil to market, our country is missing out on nearly $13 billion in federal tax revenue between 2013 and 2023.    That’s the equivalent of building six brand new St. Paul’s hospitals in Vancouver, or, that lost tax revenue could have paid the full salaries for more than 26,000 new teachers in B.C. for 10 years.

Be the first to comment on "Supreme Court Dismisses B.C.’s Appeal in Trans Mountain Case"