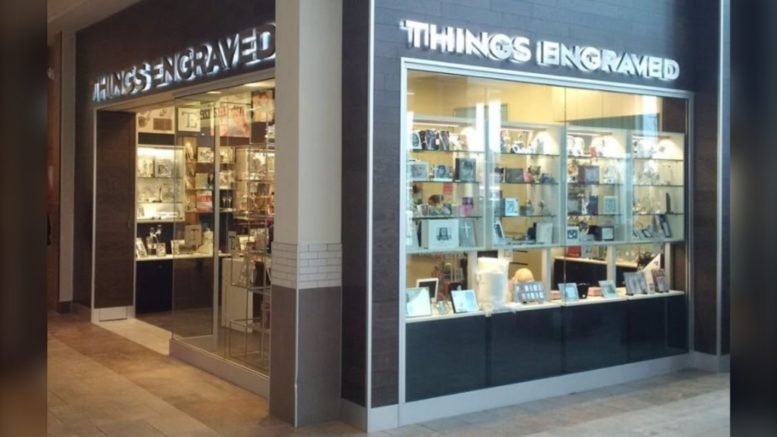 Toronto/Fraser Valley (with files from CTV) – At first, Sadie Hull though the loss of her job with Things Engraved at Chilliwack’s Cottonwood Mall was just an isolated downsizing.

Reports from other media outlets including CTV say that Thursday was the last gasp for the chain.

Sadie Hull and her father, Chilliwack businessman (and former Mayor candidate) Cam Hull told FVN that Sadie received a letter stating that due to financial consideration, the chain was laying off employees. That included the 4 full time staff in Chilliwack.

The thing was, no one saw it coming. Workers only received 24 hours notice, if that, as well as a letter explaining the situation.

In letters sent to store associates and head office employees obtained by CTVNews.ca, CEO Shawn Brock wrote that they were being terminated immediately “as a result of financial difficulties over the last few years.”

He added that the company will work to “potentially re-organize and/or invigorate the business with new capital.” Brock thanked employees for their hard work and said he wished them well, adding that they would be paid severance.

The company’s next steps – including what will happen to leftover items — remain unclear.

Things Engraved opened in 1982 in a handful of malls and offered personalized engraving. Over the next three decades, the company expanded to more than 70 locations from coast to coast.

Inquiries to head office as well as Cottonwood Mall management have not been returned.

Chilliwack School – A Recipient Of Indigo 2017 Adopt A School Program