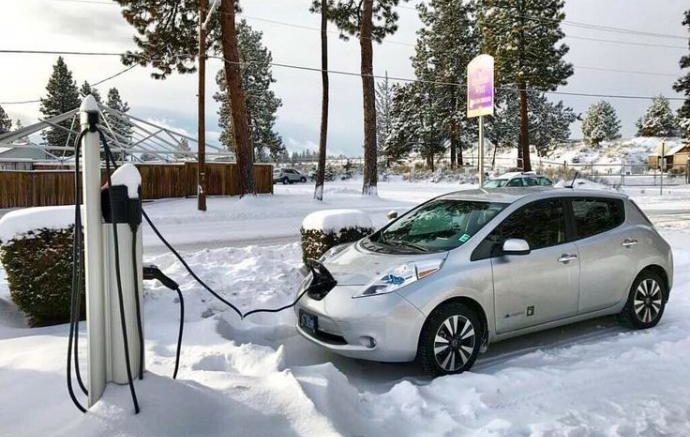 Fraser Valley/Berlin (Disclose.TV)- Just when the Province of BC is touting that over 30,000 EV’s or electric vehicles are on the road, and many municipalities are using them.. comes perhaps, a reality check.

A new German comparative test of the car picture shows that electric cars massively lose range in winter. In frosty temperatures, the range of four out of five test candidates dropped to under 70 kilometers, and that of the Renault Zoe to under 60 kilometers.

Due to its enormous battery, only the Tesla Model S was able to reach a range of over 200 kilometers even in winter temperatures, but the luxury car is in a price range (it is available from 78,000 euros or $114K CDN) that most drivers simply cannot cope with.

The result is not surprising. Batteries are less efficient in winter due to their chemical properties. This insight does not seem to have reached the planners of the traffic and energy turnaround yet. Tests conducted by the independent German Dekra testing organization have also shown that the power loss of a battery can be as low as minus five degrees up to 50 percent.

With Canadian Winter Temperatures dropping to the minus 30’s, this doesn’t bode well for the industry.

Disclose.TV went on to say : The results of the Auto-Bild test are simply a catastrophe for politicians, who are still persuading citizens that it is possible to switch from private transport to battery-powered vehicles. The truth is, however, that electric cars have so far only been suitable as city cars for rich people who can afford to put a classic car with a combustion engine in their garage alongside an electric car. This is certainly not environmentally friendly, because dual motorization consumes money, parking space, and resources.