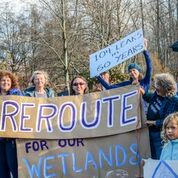 Chilliwack – Over the weekend, the group Chilliwack Reroute for Water, were at Watson Elementary School. A group clasped hands and stretched from end-to-end of the sports field between the two pipeline markers on either side, in a symbolic gesture of protection of the school and those within it. They are directly affiliated with Chilliwack Citizens for Change.

The focus is to keep up the pressure on City Council and other government and regulatory bodies, about their concerns over any possible leak, spill and potential disasters.

The group is concerned about the twinning of the Trans Mountain Pipeline and the proximity to the Aquifer as well as Watson Elementary and Mount Slesse Middle School.

There are two city wells on the school property.

The group also notes on their Facebook page that the Planned “twinning” would:

*Add 50,000 barrels per day through a 66 year old pipe.
*Add a 2nd pipe at 540,000 barrels per day
*Total over 98,000 litres per minute of toxic, cancer-causing, volatile compounds
*Risk hundreds of children every school day for generations
*Put our city’s drinking water at risk.