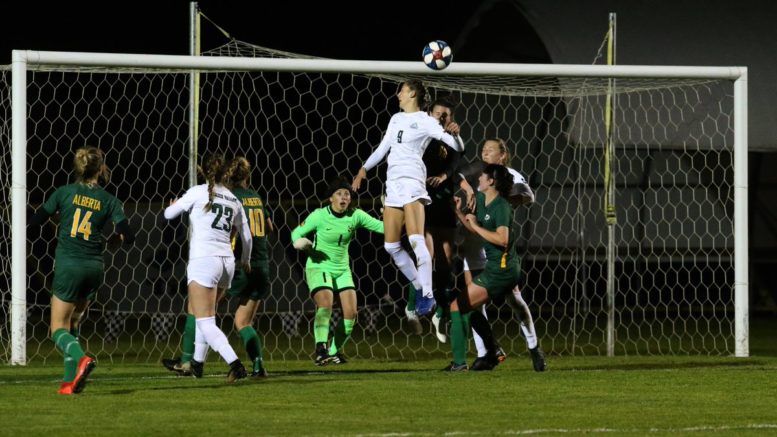 Langley – Bryana Buttar’s goal was the difference as the University of the Fraser Valley women’s soccer team edged the Alberta Pandas 1-0 in the first round of the Canada West playoffs on Friday evening at Chase Office Field.

In the 55th minute, Buttar ran onto a ball flicked on by Kate Fisher, took a touch to push it ahead, and then beat onrushing Alberta keeper Ashley Turner to it, chipping it over her into the net.

Goalkeeper Andrea Perkovic and the Cascades’ backline made the goal stand up – sophomore Perkovic finished with nine saves for her first career playoff victory, and a clean sheet at that.

UFV moves on to face the host Trinity Western Spartans in the quarter-finals on Sunday at 3 p.m., with the winner advancing to the CW Final Four.

“Alberta’s a good team – they’re solid, athletic and veteran,” Cascades head coach Rob Giesbrecht said afterward. “I was really proud of how we went at them.

“It’s nice when the girls apply what we talk about, because we literally talk about Kate looking for one-touch flicks more often, and then Bryana gambling more often. It paid off, and they did fantastic.”

The Cascades carried the play in the first half, outshooting the Pandas 9-3, but had nothing to show for it. In the early going, Brittney Zacharuk tried an ambitious shot from distance that Turner blocked, but the ball slipped from her grasp. Buttar came swooping in, but Turner arrived at the same time and smothered it.

At the other end of the pitch, the Pandas’ Nicole Palladino redirected a cross on goal in the 41st minute, and Perkovic was in position but had to be sharp to snag it.

Shortly thereafter, UFV’s Lampen was sent down the right and unleashed a rising shot, and Turner got just enough of it to nudge it off the crossbar.

The Cascades broke through early in the second half. Right back Kailyn Halvorson got the play started, extending her right leg around an Alberta opponent to intercept a pass and poke it skyward. The ball fell to Fisher, and she nodded it into the path of Buttar, and she took it from there.

The territorial edge began to tilt the Pandas’ way after the goal, but Perkovic was up to the task. On one dangerous Alberta foray, she came flying in to punch away a cross. In the 88th she came up with her best save of the night, diving to her right to parry Morgan Corbett’s rising shot from the edge of the box.

Fisher’s tireless work up front combined with her high-quality set-up on Buttar’s goal earned her UFV player of the match honours, and Giesbrecht also lauded the solid play of Perkovic in goal.

“I’m really proud of how we played in the first 55 minutes – we were assertive, we were getting behind, we were getting chances,” he said. “I think it’s natural when a team scores that the momentum changes sometimes. We kind of took our foot off the gas, and they started playing with a bit more confidence and started having a territorial edge on us.

“The takeaway for us is, we’ve got to stay assertive even when we’re up.”

It’s déjà vu all over again for the Cascades in the quarter-finals, as they face the Spartans for the third straight year at this juncture. TWU eliminated UFV each of the previous two years by matching 1-0 scores.

“I’m excited about it,” Giesbrecht said. “The competitor in me loves to be challenged by playing against the best, and we get another crack at them. We had a game here a few weeks ago (a 5-1 loss on Oct. 11) where we weren’t quite proud of how we played in that opening half. We get a chance to redo that, and we have nothing to lose. We’re going to believe in ourselves, and we’re going to give a good account of ourselves and see what happens.”