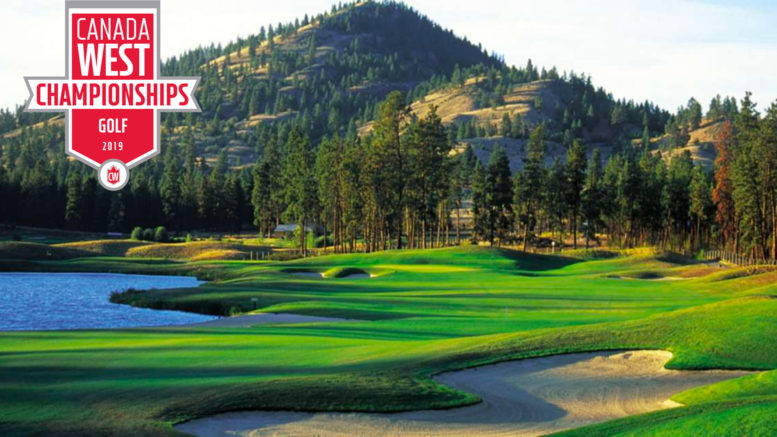 Kelowna (with files from Evan Daum, Canada West) – With a red-hot Daniel Campbell leading the way, the University of the Fraser Valley men’s golf team surged to the lead at the Canada West Golf Championships in Kelowna on Saturday.

Campbell, a senior from Bellingham, Wash., staked out a familiar spot atop the men’s individual leaderboard, carving up the Bear course at Okanagan Golf Club to the tune of an eight-under 64. He eagled the par-five seventh hole and added seven birdies against just one bogey to build a three-stroke lead over Nik Federko of the host UBC Okanagan Heat. Campbell’s 64 was just one shot off tying the course record of 63, which was last fired in 2018 by JD Tomlinson during a Mackenzie Tour qualifying event at the Bear.

Two other veteran Cascades – Kyle Claggett (-1) and Wyatt Brook (-1) – also finished under par for the day, and are tied for sixth overall.

Freshman Jacob Armstrong, playing in his first event as a Cascade, had a strong finish to his round, going -3 over his last six holes to finish at +2 on the day (T-14th). Halen Davis (+5, T-21st) rounded out the UFV contingent.

With the top four scores counting toward the team total, the Cascades are the only squad in red numbers at -8, ten strokes clear of the second-place Victoria Vikes (+2) heading into Sunday’s final round. The UBCO Heat (+5), UBC Thunderbirds (+5), and Manitoba Bisons (+9) comprise the rest of the top five.

“Really solid start for the guys today,” Cascades head coach Chris Bertram said. “Obviously when your No. 1 player shoots 64, that’s a big advantage. But once again we showed our depth.

“Jacob Armstrong clutched up big for us today in his debut. He battled hard down the stretch to give us a much-needed 74.”

On the women’s side, rookie Sarah Lawrence led the Cascades into podium position on Day 1, carding a three-over 75. The Snohomish, Wash. product started slowly – opening on the back nine, she was +5 as she made the turn but heated up at that point, going -2 on the front nine. She’s tied for third in the women’s individual, just a stroke back of co-leaders Kate Johnston of UBC and Rhiannon Jones of UVic.

Fellow UFV rookie Natasha Kozlowski (+9) is tied for 12th overall, and Emery Bardock and Sharon Park are both T-18th after shooting matching rounds of +11.

With the top three scores counting, the Cascades (+23) sit third in the women’s team event, trailing UBC (+9) and UVic (+19), and holding a seven-stroke margin over fourth-place Manitoba (+30).

“Sarah had one bad hole (a triple-bogey on the 16th), really, and if she didn’t have that, she’d be in first place,” Cascades assistant coach Jennifer Greggain noted. “Obviously she’s walking away from today’s round with a lot of positives, and if she plays as well tomorrow as she did today, I think she has a great shot at bringing home this championship.

“As a team we’re not too far out of second place, and still within striking distance of the lead, so we have high hopes for tomorrow.”

Sunday’s final round tees off at 9 a.m., and live leaderboards are available at the links above.