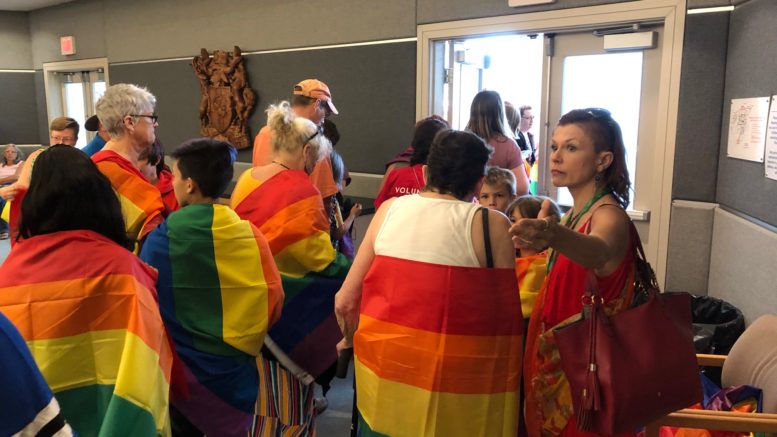 Chilliwack – It was not a surprise for the 50 or so who proudly draped themselves in rainbow flags and colours, hoping to persuade Chilliwack City Council on Tuesday afternoon, to allow the Downtown Rainbow Crosswalk on Mill Street.

That wasn’t going to happen. In a somewhat testy exchange between Mayor Ken Popove and some supporters (as Popove was trying to maintain decorum) , one by one councilors made their argument.

Both Councilor Jason Lum and Mayor Popove almost tried to leave the door ajar for future conversations down the road. Lum was the only member to vote in favour. Councilor Sue Knott noted she would not support the idea as she is elected for all people, not just one or two interest groups. She also laid out the olive branch for all citizens to simply get to know each other, regardless of race, creed or sexual orientation. Councilors Harv Westeringh, Jeff Shields and Bud Mercer were a combination of blunt and tactful in their rejection, knowing full well, this was a hot button issue.

Councilor Chris Kloot was not in attendance for the afternoon session.

Near the end of the 11 minute debate for council ( no public debate was scheduled) tempers and f-bombs were thrown by a couple of supporters. Note that in the video :

Organizer Amber Price told FVN and chillTV, that the fight is not over and other Provincial avenues may be explored:

Supporter Dr Carin Bondar was blunt. She told FVN and chillTV that “(the decision) it’s pretty token but it’s pretty nice when you have to make these people look you in the eye and explain their views.