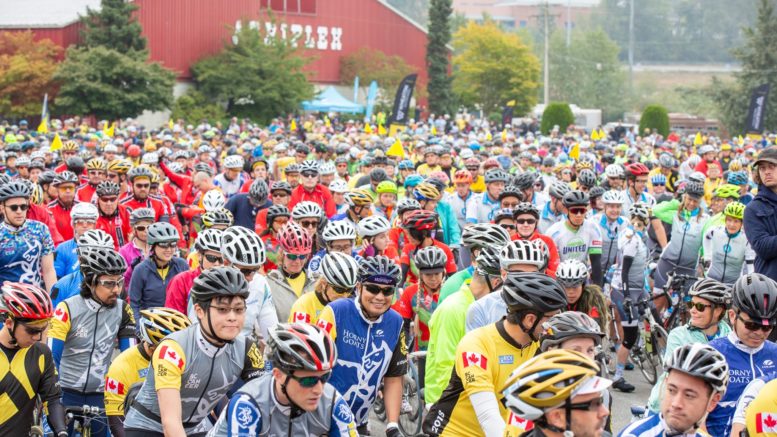 BC Ride to Conquer Cancer

Fraser Valley – In 2018, the Ride to Conquer Cancer was shortened due to thick smoke from Interior wildfires. That won’t be the case this year.

On Saturday, August 24, participants will embark on the 11th annual Ride to Conquer Cancer®, a two-day 200+ kilometre cycling fundraiser benefiting the BC Cancer Foundation.

The ride will once gain be from Cloverdale to Hope and the Facebook page can be found here.

During Opening Ceremonies, thousands of Riders will gather to hear from organizers, executives and a cancer survivor to kick-off their journey. The total fundraising amount for The 2019 Ride will be announced.

Riders will then hear from Rick Davis, cancer survivor from Vancouver, who has been riding for six years now with his team The Summit Seekers who have raised almost $100,000 to date! In February 2013 after Rick was diagnosed with a very rare form of cancer, a stage 3 Adrenocortical Carcinoma he was told he only had a couple of years to live. Thanks to the support of the BC Cancer Foundation, his incredible team of Doctors at BC Cancer, dear friends and family and the funds raised by The Ride, Rick is able to Ride with us today alongside his wife Jane and share his story.

A Riderless Bike Procession will then take place, representing those who once rode and are no longer with us. Cancer survivors will lead the bicycle down an aisle at the ceremony while Riders take a moment of silence.

Over its 11-year history, the Ride to Conquer Cancer® has raised over $96 million to support more than 47 world-leading research projects underway at BC Cancer, advancing care and providing hope to over 77,000 people facing cancer across British Columbia.

ePact – An Emergency Network Not Just For Touring Athletes

Ride To Conquer Cancer In Valley- August 25 & 26 – Shortened Due To Wildfires, Smoke