Abbotsford/Richmond – August 14, 2019 UPDATE – The TSB ruled that the 2018 accident involving Island Express Air at Abbotsford International Airport, was a combination of ice on wings, a recent snow fall and the poor decision by the pilot to take off, when the place should have stayed grounded.

The ruling from the Transportation Safety Board: In the release of its investigation report (A18P0031) Wednesday Agusdt 14, the Transportation Safety Board of Canada (TSB) found that pilot decision-making and winter weather conditions contributed to a 2018 accident in which a Beechcraft King Air B100, operated by Island Express Air Inc. (Island Express), collided with terrain shortly after take-off from Abbotsford Airport, British Columbia.

On 23 February 2018, the pilot, who was also the owner of Island Express at that time, and nine family members boarded the Beechcraft King Air for a trip to California. Seconds after takeoff, the aircraft experienced an aerodynamic stall resulting from ice contamination on the wings. In an attempt to make an immediate off-field emergency landing, the pilot applied forward pressure on the control column to land the aircraft. The aircraft collided with the terrain and slid to a stop north of the runway. The pilot and five passengers sustained serious injuries while the four remaining passengers received minor injuries. The aircraft was destroyed by the impact.

The investigation found that the decision to take-off came after 14 minutes of exposure to heavy snowfall, which resulted in conditions highly conducive to severe ground icing. The pilot’s decision making was affected by continuation bias, illustrated by his desire to complete the flight with his family and the attempt to take off despite exposure to severe ground icing conditions. The investigation also found that the pilot and one passenger sustained serious head injuries as a result of not wearing available shoulder harnesses.

In addition, the investigation highlights the severity of heavy snowfall conditions from a ground icing standpoint. If pilots rely only on the snowfall intensity reported in aviation routine weather reports or automated terminal information service broadcasts, they will not correctly determine de-icing and anti-icing holdover times (the estimated time that an application of de-icing/anti-icing fluid is effective in preventing frost, ice, or snow from adhering to treated surfaces), increasing the risk of aircraft accidents.

FEBRUARY 28, 2018 UPDATE – Transport Canada suspended Island Express Air’s Air Operator Certificate. The suspension prohibits the company from providing commercial air services. The department took this action in the interest of public safety due to the airline’s February 23  accident in Abbotsford, and its contraventions of the Canadian Aviation Regulations.

In 2016, Island Express Air was fined $30,000 for repeatedly allowing improperly maintained aircraft to fly. In this accident, two people were hurt. 10 were on board (2 crew and 8 passengers).

In light of these threats to public safety, Transport Canada will not allow Island Express Air to resume its commercial air service until it proves it can keep its operations consistently compliant with aviation safety regulations.

The company has gone on record stating that they will address the issues put out by transport Canada.

ORIGINAL STORY – FEBRUARY 23 – A small aircraft on a charter flight (Island Express Air heading to California) made a belly landing in a raspberry field as it slid off a runway at YXX Abbotsford Airport.

This happened during the lunch hour on Friday as snow was falling in the Fraser Valley.

There were ten people were on board (two crew, eight passengers including possibly two to three children) but no one was seriously hurt. One person received cuts but that has not been confirmed. Canadian Press, Huffington Post, Global and CTV say the aircraft slid off a runway. The landing gear was damaged but no flames were spotted. 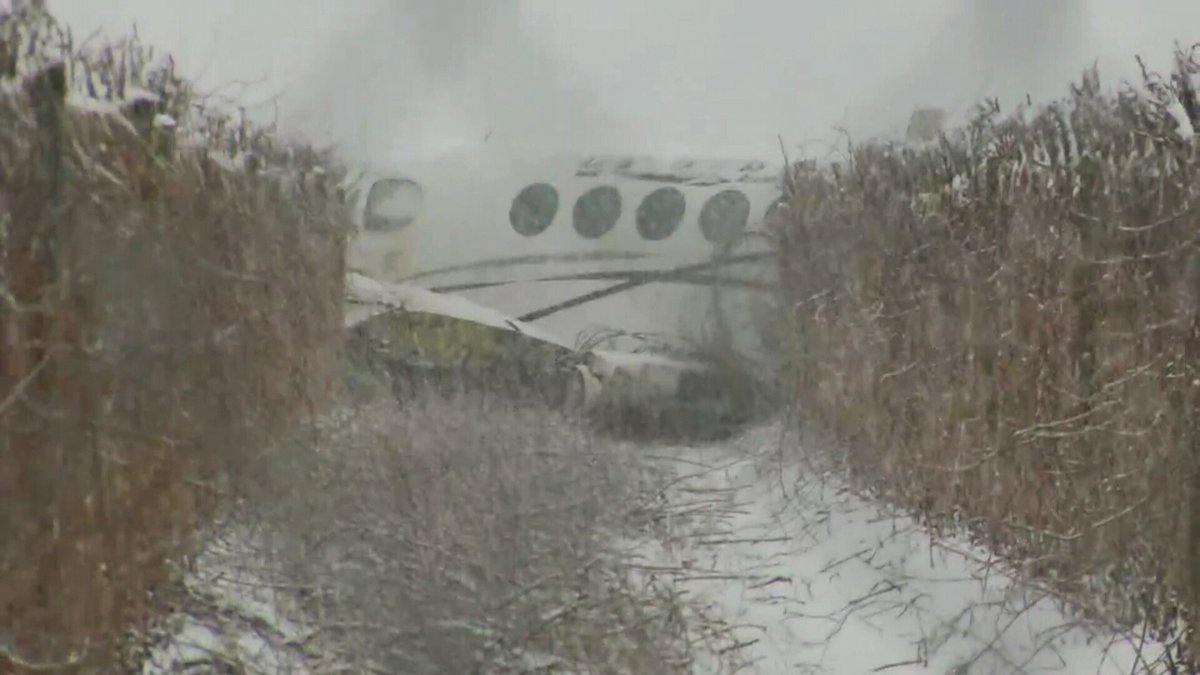 The TSB Transportation Safety Board has taken over the investigation of the accident.

Be the first to comment on "Transport Safety Board Cites Ice, Snow, Pilot Error In 2018 Crash Of Small Aircraft That Belly Landed At YXX"