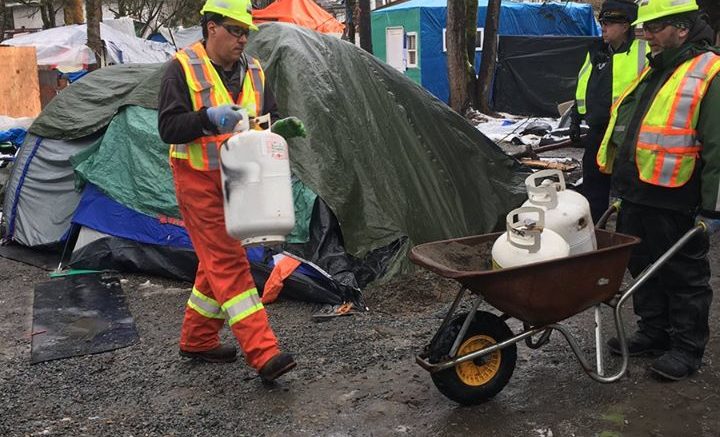 Maple Ridge – Last week, BC Housing Minister Selina Robinson gave Mayor Mike Morden until Friday, March 8th to work with the province on comprehensive housing solutions in Maple Ridge. On Monday with the lifting of the BC Fire Commissioner’s emergency evacuation order at Anita Place Tent City, which kicked residents out of their homes one week ago, residents are returning to a city-controlled camp.

While the City of Maple Ridge has given BC Housing permission to turn the communal warming tent back on, the Fire Chief Howard Exner will not authorize any in-tent heating sources. Those propane tanks created problems which turned into fires that caused the evacuation in the first place.

The Alliance Against Displacement, the advocate for the homeless, were concerned for returnees. In a statement to FVN:
Upon returning to camp on Monday, Anita Place residents encountered a checkpoint manned by private security guards and city staff. Bylaw officers are barring access to residents who were unable to navigate the city’s opaque and deeply disorganized “verification” process two weeks ago, which is part of the fire safety injunction order that the city was granted by the Supreme Court in February.