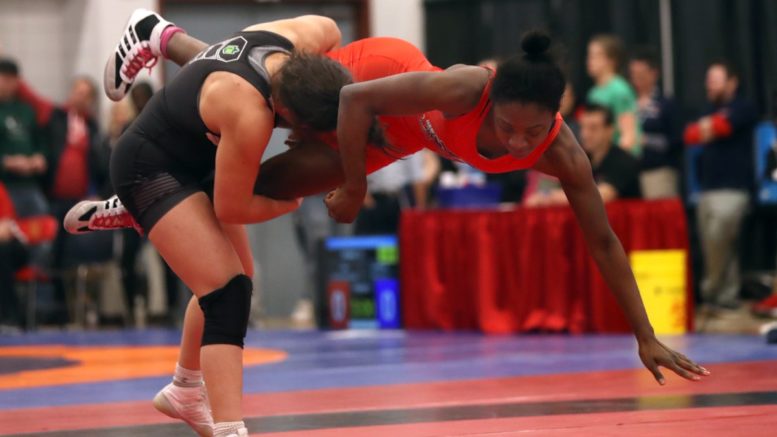 The University of the Fraser Valley wrestling program had a strong showing on Day 1 at the U SPORTS championships in Calgary, with Brad Hildenbrandt, Ana Godinez Gonzalez and De’Andre Williams leading the way.

Four other Cascades earned the right to compete in bronze medal matches: Amber Wiebe (55 kg) and Calista Espinosa (48 kg) on the women’s side, and Parker McBride (57 kg) and Simren Brar (54 kg) on the men’s side.

“It was a long day, but a good one,” Cascades interim head coach Stacie Anaka summarized. “Everyone performed quite well, though we had a couple injuries unfortunately. We had some tough matches, some ups and downs. There’s lots of nerves at nationals, especially facing wrestlers you haven’t faced before. It should be a good day tomorrow.”

Hildenbrandt and Godinez Gonzalez were typically dominant – they each posted three straight victories via tech fall, without allowing a single point against.

Hildenbrandt is in search of his third consecutive U SPORTS heavyweight crown, and he’ll face Frederick Choquette of the Concordia Stingers in the final. The fourth-year Cascade from Surrey, B.C. defeated Choquette during round-robin action at last year’s U SPORTS championships by a 10-5 score.

Godinez Gonzalez is looking to improve on the silver medal she earned last year, and she’ll face a familiar foe in the final in Katie Mulkay of the Alberta Pandas. The UFV sophomore from Surrey defeated Mulkay 10-0 at the Canada West championships two weeks ago.

Williams traversed a thrilling path to his gold medal match. After pinning David Kumar of the Western Mustangs 54 seconds into his opener, he ran into turbulence in his next two clashes. In Round 2, the Kent, Wash. product found himself trailing Devan Larkin of the Alberta Golden Bears 8-3, but rallied for a 9-8 win highlighted by a four-point throw. In his last round-robin match, he faced a 14-11 deficit in the final minute against Roch Provost of the Brock Badgers, but managed to get Provost on his back for the pin with less than 30 seconds remaining. He’s set to take on Abraham Mfonpa’re Ntienjem of the Lakehead Thunderwolves with gold on the line.

“De’Andre was essentially able to have fun, and just go out and wrestle,” Anaka explained. “He didn’t get down mentally, and he was confident he’d be able to come out on top. It looked like he was enjoying himself out there.

“Brad had wrestled most of his opponents before, and he was confident and composed in all of his matches. He looked very focused. And Ana out-wrestled all of her competition. Her movement and her poise out there is exciting to watch.”

The Cascades’ quartet who will grapple for bronze on Saturday – McBride, Brar, Wiebe and Espinosa – each posted 2-1 records on Day 1, coming back strong and wrestling extremely well after their losses to punch their tickets to the bronze medal matches.

Karan Dhillon (men’s 82 kg) and Sunny Benning (men’s 90 kg) are in fifth/sixth placing matches after going 1-2 on Friday. They each bounced back to win their final matches of the day.

UFV’s team-record 11-member contingent at nationals also fell victim to a pair of injuries, as Amarvir Atwal (men’s 72 kg) and Ali Rahguzar (men’s 61 kg) were forced to withdraw. Atwal posted a 1-2 record before exiting, while Rahguzar was injured in his first match and could not proceed.