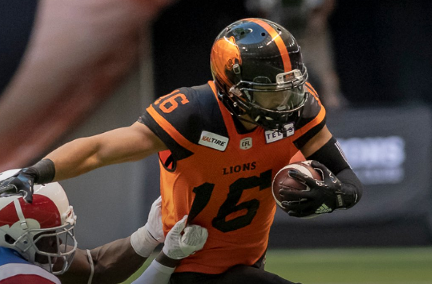 Vancouver – While football fans wait and see if Edmonton Eskimo QB Mike Reilly leaves Edmonton and comes to the BC Lions, the Leos were busy on Monday.

The BC Lions Football Club officially announced that pending free agent receiver Bryan Burnham has signed a two-year contract extension with the team keeping him in black and orange through the 2020 season.

ʺBryan is a big part of our offence and this is a key signing for us on the eve of free agency.ʺ said GM Ed Hervey. ʺWe believe that we haven’t yet seen how good Bryan can truly be in this league. He has all the tools to grow into one of the most dangerous and impactful players on the field.ʺ

A five-year, 65-game vet, Burnham’s efforts last season were recognized with his third-straight West Division All-Star selection to go along with two CFL All-Star nods in 2016 and 2017. His 4,159 career receiving yards have him on the cusp of breaking into the top-15 of all-time BC Lions receivers and another 1,000-yard campaign in 2019 will see him sit among the top-10.

ʺBritish Columbia has become my home and I’m very excited to be staying with the Lions,” said the New Jersey native. ʺWe’re building something very special here and I’m excited to be part of Ed and DeVone’s vision for the future of the BC Lions.ʺ

BC Lions Blow Another Fast Start

Lions Fall Apart In Second Half Against Eskimos