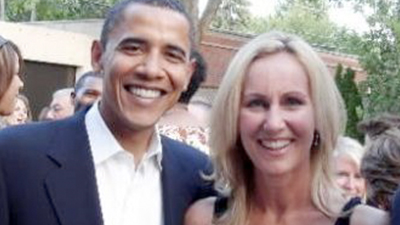 Surrey -The Surrey Board of Trade will welcome, to Surrey, the former Senior Adviser to USA President’s Bill Clinton and Barack Obama, Betsy Myers, as the keynote speaker for the 10th Annual Surrey Women in Business Awards Lunch on March 13, 2019.

A leading advocate in the advancement of women in both business and politics, Betsy Myers was one of the masterminds behind President Barack Obama’s 2007-2008 campaign. Since then she has become one of the most sought-out speakers and consultants on the changing nature of leadership.

Betsy Myers served as Chief Operating Officer and Senior Adviser to Barack Obama’s 2007–2008 presidential campaign and chaired the Women for Obama organization. As Chief Operating Officer, Myers used her customer service expertise and business savvy to establish Obama’s national campaign operations in January 2007. Though Obama was initially considered a long-shot candidate, Myers built up a $100,000,000 organization that stayed focused and turned Obama into a serious competitor after a historic win in the 2008 Iowa Caucus. Ultimately, her team helped secure him the White House in a general election in which he received 69.5 million votes, the highest amount of votes ever won by a presidential candidate.

Betsy Myers was also a senior official in the Bill Clinton administration. She was the first director of the White House Office for Women’s Initiatives and Outreach.

Before joining the Obama campaign, she was Executive Director of Harvard’s Center for Public Leadership. She currently serves as Founding Director of the Center for Women in Business at Bentley University in Waltham, Massachusetts. She lives with her family near Boston.

Betsy has a wealth of experience in corporate, political and higher education. Betsy has been taking the message of leadership and women’s advancement to organizations and corporations around the globe. Betsy’s book, Take the Lead, was voted one of the top leadership books of the year by The Washington Post.

Women and Leadership
In this provocative presentation, Betsy discusses important research and thinking around women in leadership. She explores the history of the movement for equality and shares insights gleaned from her work with Gloria Steinem, Betty Friedan, and Bella Abzug. Tracing her own career path, Betsy brings perspective from her experiences as a successful female leader. She helps audiences understand what it will take to continue closing the confidence gap, how to confront the balance question, the different leadership styles of men and women, and leadership necessary for the next generation of women. Betsy will translate lessons learned from the campaign and President Obama’s leadership style that could be applied to every organization and leader in both the public and private sector. Myers outlines key elements of respectful leadership and provides insights for leaders who want to improve both their personal and organizational success.