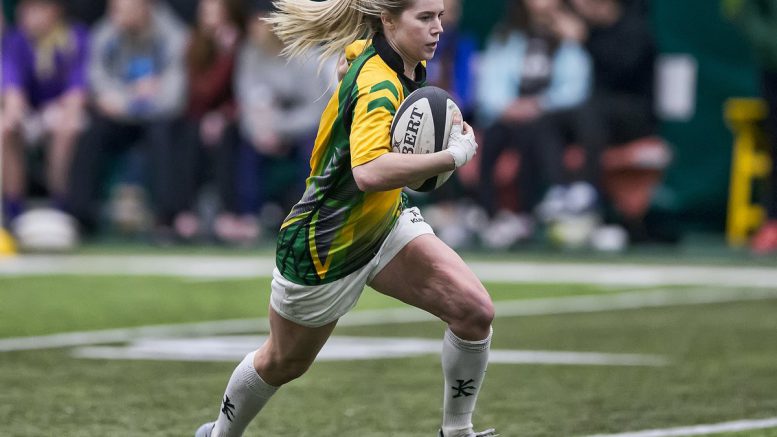 Abbotsford (with files from Evan Daum, Canada West communications)– As the University of the Fraser Valley women’s rugby sevens club embarks on its third season of existence, they’re dreaming bigger than ever before.

“This year is the first year we haven’t felt like we’re the rookies or the new kids,” head coach Jen Ross explained. “We deserve to be there, and we’re going in feeling like an established program rather than a trial. The girls have been really committed this year, and we’ve had more structure to the entire program. It’s grown a lot that way.”

The Cascades open the Canada West Women’s Rugby Sevens Series this weekend in Edmonton, playing at a tournament hosted by the Alberta Pandas at Foote Field Dome. UFV is in a pool with Lethbridge, Calgary and Thompson Rivers, and will face all three of those opponents on Saturday. Placing matches are on Sunday, and the entire schedule can be found here.

The three-tourney CW Series will also include a stop in Abbotsford hosted by the Cascades (Feb. 2-3 at MRC Sports Complex), and wraps up with a March 2-3 event at UBC. The overall champion will be based on cumulative series points, and will be crowned following the UBC event. The Victoria Vikes are the reigning champs.

Ross’s 2019 roster is led by a trio of veteran standouts: third-years Elyssa Phillipson and Mackenzie Fowler, and sophomore Shalaya Valenzuela. All three are highly accomplished players with extensive experience at the club and provincial levels.

“They’re not looking to use the excuse that we’re new anymore,” Ross said. “They have a lot of confidence in the girls and the work we’ve done.”

In all, Ross has nine returnees on the roster, and among that group, sophomores Ashlynn Smith and Jaylene Soegard also figure to play key roles. The rookie crop is led by Sophia Belsher and Melissa Jongedijk – both of whom inject a great deal of speed to the squad.

The series itself has a new look this year in terms of membership.

The conference’s original six rugby sevens programs (the Cascades along with the Alberta Pandas, UBC Thunderbirds, Calgary Dinos, Lethbridge Pronghorns and Victoria Vikes) will be joined by the Thompson Rivers WolfPack, who competed at two tournaments in 2018, at all three events this season.

Two CW rugby newcomers will enter the fold this season, The Regina Cougars will make their debut by competing in Edmonton, while the UBC Okanagan Heat will take part in both B.C. events.

“We’ve had a lofty goal to finish in the top three of each tournament this season,” Ross said. “The series has expanded to eight teams for each tournament, and if we’re not finishing top-four, we want to be in that fifth spot at the very least, making a mark for our program and establishing ourselves as a destination of choice for those who want to play rugby in university.”