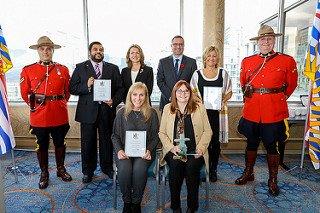 Fraser Valley – Provincial awards have been presented to four community leaders and a police officer to acknowledge their contributions to community safety, healing and prevention of victimization in British Columbia.

The 21st annual Community Safety and Crime Prevention Awards were presented to:

“These awards show everyone that each of us can make a difference to prevent crime, help victims of violence and make our communities safer,” said Mike Farnworth, Minister of Public Safety and Solicitor General. “On behalf of the Province, I want to thank each of our award winners for the perseverance, commitment and passion they bring to their work.”

The awards acknowledge volunteers, non-profit organizations and other local public safety partners for work to reduce crime, violence and victimization in the community and support law enforcement and others in the justice sector. These efforts support provincial investments in policing, community safety and victim services.

Be the first to comment on "Joanne Field, Patti MacAhonic, Among 2018 Winners Of Community Safety and Crime Prevention Awards"