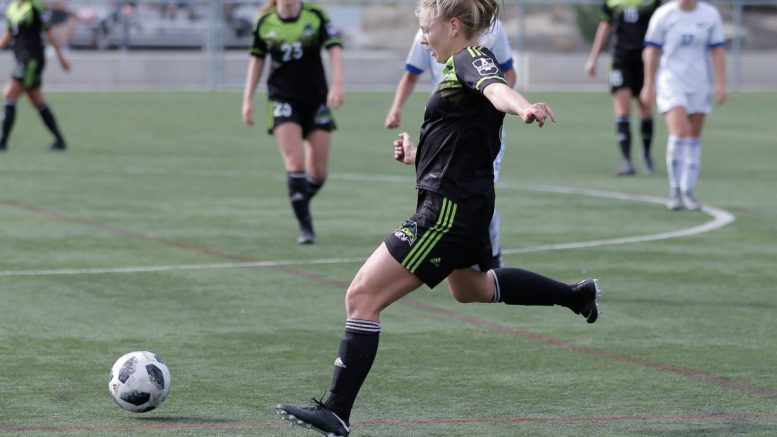 Langley (Dan Kinvig) – The University of the Fraser Valley women’s soccer team punched its ticket to the Canada West quarter-finals in the most dramatic fashion possible, outlasting the Mount Royal Cougars in a penalty shootout on Thursday evening.

Fifth round of PKs:@MRUCougars Hemans — HIT THE CROSSBAR, CASCADES WIN!!!

In first-round conference playoff action at Chase Office Field on the campus of Trinity Western University, the two teams were deadlocked at 1-1 after regulation – the Cascades’ Sarah Parker opening the scoring in the 40th minute, and the Cougars’ Erin Holt equalizing in the 75th.

The Cascades advance to face the U SPORTS No. 1-ranked Trinity Western Spartans in the quarter-finals on Saturday (5 p.m., Chase Office Field).

“It’s a good learning opportunity for us, like most of this year has been,” UFV head coach Rob Giesbrecht said afterward. “We’re fortunate to come through this and win on pens. In pens, you never know what’s going to happen.

“I thought we played OK. We generated a lot of chances, and almost paid a price for not being clinical enough on our chances. Sometimes when you get into these playoff games, the nerves get the better of the players, and the decisions they make when they’re on the ball or off the ball aren’t composed decisions. They’re panicking at times, or they’re scared to take that final touch.

It was a high-event game – the two teams combined for 43 shots in regulation, a modest majority of those (24, including eight on goal) by the Cascades.

UFV’s first great look came in the 12th minute when leading scorer Brittney Zacharuk launched a shot from just inside the penalty area, dead centre, but her rising blast hit teammate Tavia Jasper in front and was whistled offside.

Later in the first half, Vanita Bhullar unleashed a shot from distance that squeaked under MRU goalkeeper Rose Hemans and trickled toward the goal line, but Hemans was able to recover and scoop it up just in time.

The Cougars had some dangerous offensive forays of their own. Jullien Ramirez, from the left wing, and Janai Martens, from the right, had cracks at goal in quick succession, forcing diving stops from UFV keeper Sandhu.

The Cascades finally broke the ice late in the first half. Jashan Sandhar, from the right wing, lofted a lovely cross that found Parker unmarked at the far post, and she nodded it home from close range.

UFV looked to expand the lead after the break, earning a trio of corner kicks in quick succession. Their best look in that sequence came when Marianne Spring got her head on the end of a Zacharuk corner, but Hemans tipped it out of harm’s way.

In the 70th minute, a long Cascades clearance fell to Zacharuk for a clear breakaway, but her shot was right at Hemans. Then, in the 71st, Tripat Sandhu took a crack from distance, but Hemans rose to tip it over the bar.

Shortly thereafter, MRU drew even. Natalie De Marco took a pass in the penalty area with her back to goal, and she tapped it back to Erin Holt and she picked the top right corner.

The goal infused the Cougars with new life. Kaitlin Brown had a chance from the top of the box in second-half injury time, but Sandhu was able to scoop it up.

Both teams had looks in extra time. In the first OT period, Sandhar fired a drive from the top of the box, and Hemans had to be sharp to reach up and snare it. In the second OT, De Marco had a volley off a long cross into the box, but it went wide.

In PKs, the first two shooters – MRU’s Haley Nicholson and UFV’s Zacharuk – had their shots stopped. In the second round, Sandhu came up with a second straight save on Hannah Park while UFV’s Harneet Dadrao converted, giving the Cascades the advantage.

Each of the next two shooters for each team – MRU’s De Marco and Martens, and UFV’s Bhullar and Mackenzie Silbernagel – were good on their attempts, and the Cougars sent out keeper Hemans to start the fifth round. Her shot thumped off the crossbar to clinch the victory for the Cascades, 3-2 on penalties.

“Going into PKs, it’s more just about confidence,” Cascades keeper Sandhu said. “When the shooter’s up there, you look at how they line up, their body language, the way their knee turns . . . just take little details and put it into focus.

“(On Hemans’s attempt) I dove the wrong way, and I saw it go past me and hit the bar – best feeling in the world.”

It was a bitter way for the Cougars to end their campaign – even moreso considering they were also eliminated on PKs in last season’s playoffs by the MacEwan Griffins.

“We put ourselves in a position to take it to the end . . . we’re still learning from these opportunities,” MRU head coach Tino Fusco said.

“When you go down two shooters right away (on PKs), it’s difficult. At times, I think it gets in players’ headspace. But we still had a chance to win the game, and that’s what it comes down to. That’s what I’m proud about.”