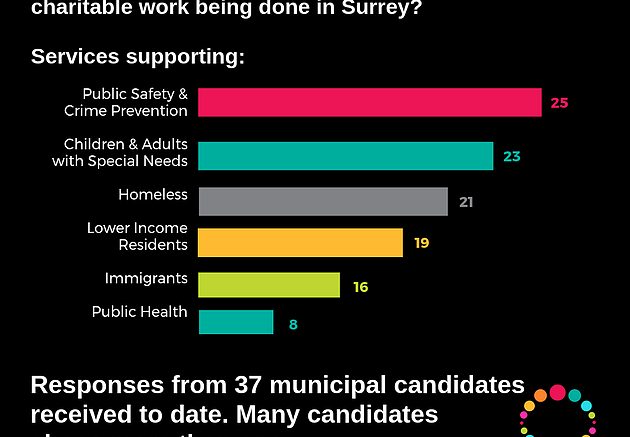 Surrey – Surrey Cares recently sent out a questionnaire to municipal candidates running for office in Surrey, with a total of 35 candidates responding.

SurreyCares Community Foundation has been supporting Surrey’s charitable interests since 1994, celebrating 25 years in 2019. They manage over $7 Million in endowed funds, and grant out approximately $250,000 annually to charities, benefiting Surrey residents. There are 773 (CRA figures) registered charities and nonprofits in Surrey, and many more charities who provide additional service here, representing many thousands of people served, thousands of jobs, and many  millions of dollars to the local economy.

The charitable sector in Canada employs 2 million people, with an additional

Candidates were then asked them to complete a short questionnaire. Here is what they had to say: 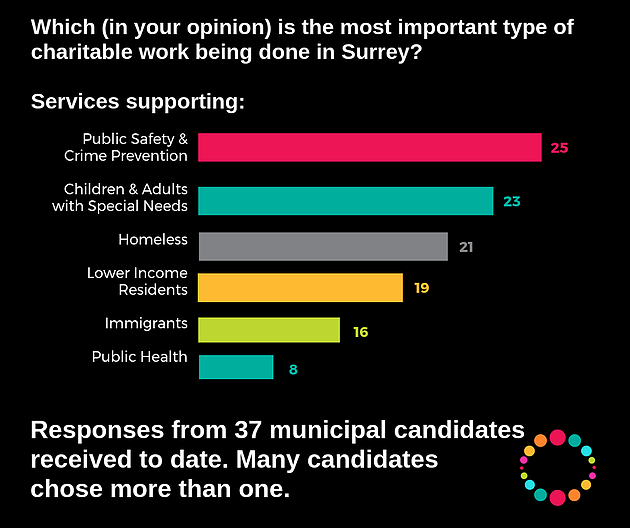 SurreyCares excels at managing invested funds in order to provide grants to local charities. Some of those funds are for City-managed projects like Darts Hill, Surrey Libraries, the Arts Centre and others.

Do you support an awareness campaign that will allow additional funds to be raised for these endowments?

Following are the suggestions we received from each of those candidates:

Tom Gill: We need to work hand in hand with organizations like SurreyCares to identify gaps in what has been working and what has not. I would love to sit down with your organization and hear from you, the experts on what we at the city can do support such a campaign.

Pauline Greaves: Sharing of information through the various committees. Marketing and support (pamphlets and online). Participation at various events. Publication of reports.

Bruce Hayne: On our website and through our distribution channels.

Rajesh Jayaprakash: We have promised a new “Surrey Arts Reserve Fund”, a one time grant of nearly $10 million to create something similar to Surrey Housing and Homeless Society to promote arts and artists. Details at the link here: http://peoplefirstsurrey.ca/page.php?page=Priorities7

Imatiaz Popat: The city needs to support and raise awareness and nonrecognition for the different organizations that serve Surrey through its website.

The remaining Mayoral candidates did not respond.

Doug Elford: Through their various forms of media.

Neneng Galanto: Encourage businesses to donate to charities and fundraising projects to support the charities.

Laurie Guerra: Help to promote and facilitate it.

Paul Hillsdon: Utilizing City marketing and communications services and venues to support these campaigns, as well as Council representation.

Feli Kongyuy: The City could spread more awareness about the campaign, and encourage its key partners to donate yearly.

Nicholas Loberg: Outreach through community groups and associations such as Business Improvement Associations, as well as facilitating partnerships

Brenda Locke: Did not answer this question.

Adam MacGillivray: The easiest way for the City to support such a campaign would be through active social media engagement and advertising.

Stuart Parker: Our city needs a central office that deals with all QuaNGOs with which the city works in partnership to ensure that strategies of partnering with one organization are utilized with others. Also, our proposed Regularization Office would seek to transfer some of the work burden from Surrey Cares to the city over the medium term.

Major Singh Rasode: From the developers who making millions.

Upkar Tatlay: I believe the allocation of resources to support the awareness campaign would be useful in order to help engage citizens in investing in landmark programs in our City and furthering the efforts to boost civic pride.

Becky Zhou: Make awareness to the public for such campaigns to raise capital. Match contributions during events and get corporate sponsorship involvement.

Cindy Dalglish: Partnering is a big portion of the work that needs to be done. And in that partnering, the City can be a vehicle for communication to the citizens. Marketing, communications, and participation are all key.

Charlene Dobie: They could advertise for you in the community centres, libraries etc.

Kapil Goyal: By providing more in class programs not just after school

Bob Holmes: Responded Yes, gave no suggestions of how.

Diana Ng: The City of Surrey works closely with SurreyCares to promote campaigns. The City could: 1. Offer some funding  2. Help with publicity of campaign events  3. Be creative with event promotions. For example, websites, various social media platforms, etc…

Adele Yu: Did not answer this question.

The third question read as follows:

Do you agree or disagree that the City of Surrey could work even more closely with SurreyCares to provide more benefit to Surrey?

All but one candidate agreed.

Council candidate Diana Ng agreed and added: I would encourage a close collaborative relationship between the City of Surrey and SurreyCares to provide more benefit to Surrey.

Candidates who disagreed were asked to explain why.

School trustee candidate Charlene Dobie disagreed and explained: It is better to keep Surrey Cares as non-partisan as possible.

The fourth and final question read:

Do you see a value in an impartial report designed to identify both gaps and what we do well, according to service recipients?

We are grateful for the time and input from these 35 candidates.