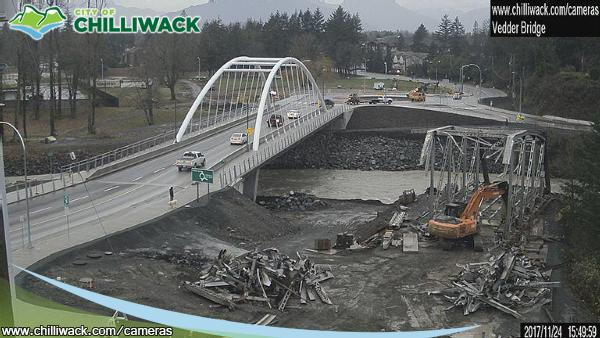 The City of Chilliwack and Emil Anderson Construction were recognized for the project’s construction staging, design innovation and bridge launch method.

This project involved the replacement of a 1947-constructed steel girder bridge with one with wider traffic lanes and shoulders as well as two additional lanes. The selection process for the replacement design-build project was a two-stage: a request for expressions of interest (RFEI) followed by a request for proposals (RFP).

The Province of British Columbia and the Government of Canada funding was based on a budget for a steel girder bridge; however, the City of Chilliwack wanted a more aesthetically-pleasing steel arch structure. The RFP was structured for teams to provide two proposal options: Option 1 (steel girder) – approximate value of $11 million, and a more aesthetically-pleasing option 2 (steel arch) – approximate value of $12.75 million.

The final decision to chose option 2 was made by city council at the time of proposal acceptance. The design-build team lead by Emil Anderson Construction Inc. proposed an innovative approach to the construction of an arch design – an approach that controlled the cost and included the city’s desire for a feature design. The city selected the winning team based on price (55%) as well as design innovation (45%). The designers, Klohn Crippen Berger, developed a highly-innovative engineering solution for the erection of the new structure and the demolition of the existing structure, avoiding any in-stream temporary works. This minimized both environmental impact and cost and made scheduling much more reliable.

New Vedder Bridge Should Be In Place By Mid-April