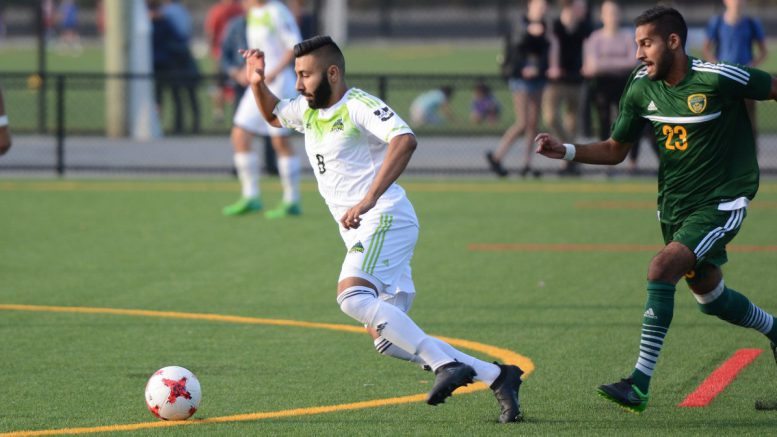 Women’s Soccer: Spartans pull away in second half, top Cascades 3-1

Langley (with files from Jack Nadelhoffer, TWU Athletics) – The Trinity Western Spartans struck twice after halftime to pull away for a 3-1 victory over the University of the Fraser Valley women’s soccer team on Friday evening in Langley.

The Cascades were level with the U SPORTS No. 3-ranked Spartans at the break – the hosts having opened the scoring in the 13th minute via Jenaya Robertson, and UFV answering in the 39th on a Brittney Zacharuk penalty kick.

TWU took over when play resumed, though, as goals from Kathryn Harvey and Seina Kashima provided the final margin.

“We started on our back foot – gave up some chances and looked nervous,” UFV head coach Rob Giesbrecht said afterward. “We were quite fortunate to be down just one early. Around 15 minutes in, I thought we flipped a switch and started being physical. That part of the game, I thought we were good – we had a lot of corners, and hit the bar on one of them. Then Gurns (Gurneet Dhaliwal) gets hauled down for a penalty and Brit finishes. A lot of positive things happened in the middle and end of the first half.

“Second half, we just told our players to tweak a few things, but their mentality was nowhere near what it needs to be. You can’t do that against a team like this. We were losing first and second balls, and making life easy for our opponents. It’s a tough lesson to learn for our young team, but we need to learn it quickly and get ready for Sunday.”

The Spartans opened the scoring after Gabi Short beat UFV keeper Joven Sandhu to a ball outside the box, and slipped a pass to Robertson for a wide-open finish.

The Cascades found some traction after that – Zacharauk curled a corner kick that went off the crossbar, and later on, Taylor Nekic’s header off another UFV corner grazed the top of the bar.

The visitors drew even after Dhaliwal made a quick turn off a throw-in and was hauled down in the box. Zacharuk stepped to the penalty spot and made no mistake for her sixth of the year, extending her goal streak to three games.

Kashima helped the Spartans get off to a great start early in the second half, slipping a through ball onto the foot of Harvey who knocked it past Sandhu into the low right corner.

Kashima scored a goal of her own in the 59th off a Robertson assist, putting the Spartans in control.

Dhaliwal and Kashima were named their teams’ respective players of the game, and Sandhu finished with eight saves for the Cascades.

The two local rivals had battled to a stalemate over the first 84 minutes of play, with TWU’s Domenic Poletto scoring in the eighth minute and UFV’s Andrew Peat equalizing in the 35th.

But in the 85th, Cody Fransen’s initial shot was deflected in the box, and Low pounced on the rebound and buried the game-winner from close range.

The result enabled the Spartans (6-1-4) to edge past the Cascades (6-3-1) for second place in the Pacific Division. The two teams renew hostilities on Sunday in Abbotsford (4 p.m., MRC Sports Complex).

“First half, we weren’t at the races – I think we were second-best,” said Cascades head coach Tom Lowndes, whose squad was missing second-leading scorer Brady Weir due to injury. “But I think the second half was a lot more even. We created some chances and we were able to stifle them a little bit.

“It’s a tough place to come – you can see why teams come here and struggle. But we’ve had a lot of things go against us tonight. We’ve had to fight a little bit of adversity from different areas, and I’m proud of the boys for that. They stuck together when they could have bowed, and done what they can. It’s never nice to concede a goal that late on, but for the most part, we did well.”

Trailing for much of the first half after Poletto’s early goal, Parman Minhas showed his dynamic skillset, spearheading the counterattack that led to the equalizer. The Cascades’ sophomore forward intercepted a Spartan pass in UFV territory and made a long, zig-zagging run, eluding several TWU defenders along the way, before laying the ball off to Peat. The rookie forward blasted home his fourth goal of the campaign.

But it was for naught, as Low connected in the dying minutes to snap the Cascades’ three-game win streak.

The upside of the home-and-home schedule this weekend is that the Cascades get a rematch in short order, and on their home pitch.

“Obviously playing at home, we’ve been very good so far this season,” Lowndes said, alluding to his team’s 4-0-1 record at MRC Sports Complex. “We’ll try to make it difficult for them at home, just like they’ve made it difficult tonight for us.”