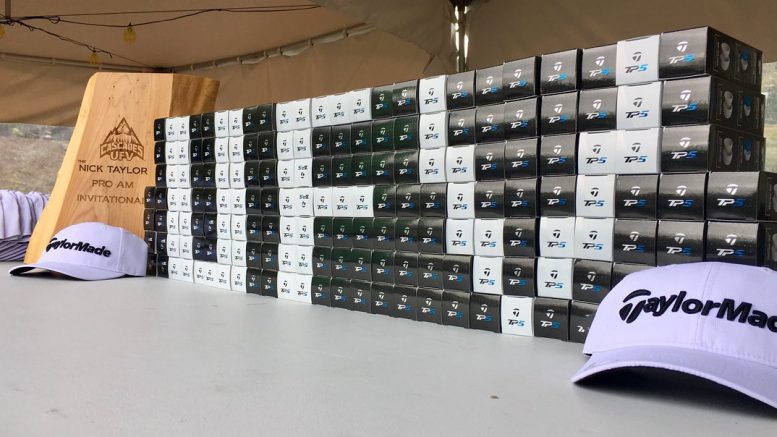 Fraser Valley/Kelowna – The second annual Nick Taylor Charity Pro-Am was a success in every respect.

The sold-out event, co-hosted by PGA Tour golfer Taylor and the University of the Fraser Valley golf program and presented by Algra Bros. Developments, featured a gala dinner Thursday followed by an 18-hole tournament Friday at Ledgeview Golf Club.

Proceeds from the gala will benefit the Starfish Pack food program, a local charity selected by Taylor and his wife Andie, which provides backpacks of food for needy school children to take home for the weekend. Proceeds from the golf tourney will go to support the Cascades golf program.

Final fundraising totals have yet to be tallied, but according to Cascades head coach Chris Bertram, preliminary estimates are that $60,000 has been generated for Starfish Pack – roughly double the amount the tournament raised for charity last year.

“It was a massive success,” Bertram enthused. “The gala last night was a real highlight. We had 200-plus people for an amazing night of food and wine and friendship and fundraising. It looks like we’ll be at $60,000 for Starfish Pack. The final fundraising tally isn’t in yet, but it’s at least that.

“Today, we had another amazing day on the golf course. The weather held off for us just enough, everybody had a really good time, and there was some great golf out there.”

Taylor, an Abbotsford product who recently completed his fourth full season on the PGA Tour, was the two-time defending champion of the tourney (previously contested as the Cascades Pro-Am, dating back to 2010). Despite firing a four-under 66 on Friday, he was denied the three-peat by local pros Kevin Stinson (Mission) and Brett Webster (Abbotsford), who both shot 65.

Webster is an alum of the Cascades men’s golf team, as are Connor McLellan (Chilliwack) and Brett Stewart (Abbotsford), who shot 67 and 68, respectively, to finish solo fourth and fifth. Among the current UFV golfers in the field, sophomore Kyle Claggett was the top finisher, carding a 69 to tie for sixth.

Taylor said he was proud of how the event had grown.

“I grew up in Abbotsford, my mom is a teacher in the Abbotsford School District, and my wife Andie is a social worker, so raising money for a program that gives food to kids who don’t have food when they go home for the weekend is a natural fit,” Taylor said.

“I won’t believe it until the final (fundraising) number comes along,” he added with a smile, “but it’ll be great to be able to give that to Starfish Pack, especially at the start of the school year. I know it’s a busy time for them.”

No. 1-ranked Cascades set to tee off second PACWEST tourney on Saturday

A busy week for the Cascades didn’t end when the Taylor tourney wrapped up. The UFV men’s golf team immediately hopped in a van bound for Kelowna, where they’ll play the UBC Okanagan Invitational, Saturday and Sunday at Okanagan Golf Club.

“We’re going into this weekend at a bit of a disadvantage, not getting to play a practice round,” noted Bertram, whose squad won the season-opening Langara Invitational last week. “But we got to play Ledgeview today, which is great, and obviously that sacrifice is well worth it for the program in the big picture. The good news is, most of our players know that golf course in Kelowna fairly well. We’ll get out there early tomorrow and get a little bit of work done.”

Be the first to comment on "UFV Golf – Busy Weekend On The Road, Nick Taylor Charity Pro-Am"