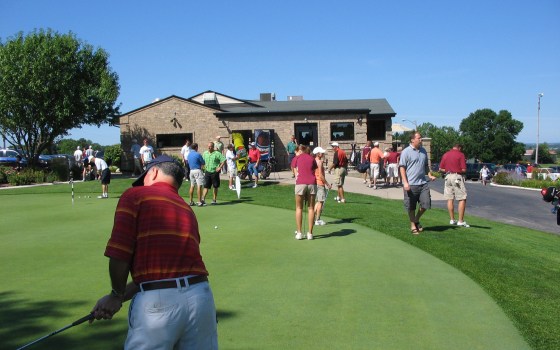 Abbotsford – Abbotsford City Council has voted to delay the start of the Ledgeview Golf Course clubhouse replacement project pending further information about the timing of the community benefits funding. The announcement was made on Friday by announced Mayor Henry Braun.
“Last week’s Federal Court ruling related to the Trans Mountain Expansion Project (TMEP) has meant that there will be delays with the start of that project’s construction, and subsequently, the release of Abbotsford’s TMEP community benefits funding,” said Braun. “With this new uncertainty around the timing of the release of the community benefits funds, City Council has decided to delay the start of the Ledgeview Golf Course clubhouse replacement project until more information is available.”
In 2016, the City signed a community benefits agreement with then project owner Kinder Morgan Canada for funds to offset the disruption caused by the project. The funds were earmarked to be used by the City to assist in supporting the construction of a new clubhouse and restaurant at the Ledgeview Golf Course, adding a much needed upgrade to the facility.
The FVN story on the Community Benefits Agreement can be found here.
The existing clubhouse was destroyed by fire in 2016, resulting in an insurance claim being filed by the City. The insurance funds alongside the TMEP community benefits funds are being collectively applied to fund the building of a new clubhouse facility and banquet centre.
The FVN story on the fire can be found here.
“We have asked staff to come back with an update for Council within the next few months, or as new information becomes available,” said Braun. “Council believes this is the best approach given the Federal Government’s indication that they will be evaluating the implications of the Court’s ruling over the next several weeks and may as part of that process, be able to provide an updated project timeline.”
For the past 40 years, the Ledgeview Golf Society has managed and operated the Ledgeview Golf Course facilities on behalf of the City. In 2014 the City renewed the lease agreement with the Society to operate the facility with the City receiving revenues in the form of rent and profit sharing. Ledgeview Golf Course occupies approximately 115 acres north of McKee Road in Abbotsford and the course has been rated in the top 20 full-length Golf Courses in BC by the Province of BC.
Ledgeview hosts over 17,000 rounds of golf for the general public each season.