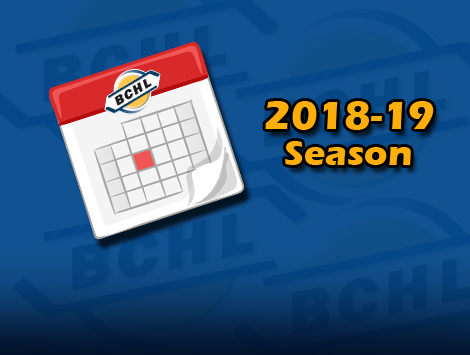 Chilliwack/Langley/Surrey/Merritt – The BCHL has finalized and published its schedule for the 2018-19 season with the exception of the Showcase event which is set for September 20 to 22 at Prospera Centre in Chilliwack.

Opening night for the coming season will be Friday, Sept. 7 and the regular season will conclude on Sunday, Feb. 24, 2019. There are currently 476 games scheduled but 17 more will be added once the Showcase matchups are revealed.

Fans and media can find the schedule on the league website under the Schedule & Scores menu and League Schedule page (http://bchl.ca/stats/schedule/all-teams/). The display defaults to today’s date so users will have to adjust the dropdown menus on that page to view the month they wish to see.

Alternatively, users can visit the League Scoreboard page but again will have to adjust the dropdown menus to view dates that contain regular-season games.

Dates for exhibition games will also be added to the schedule later and will be finalized when teams’ main training camps get underway in late August.

All regular-season and playoff games will once again be carried on the BCHL’s HockeyTV pay-per-view site (http://bchl.hockeytv.com). Fans can also follow games on their mobile devices by getting the HockeyTV app by HockeyTech Inc. in the app store.