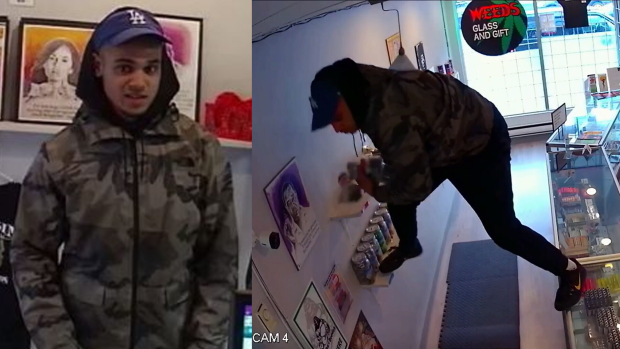 Vancouver/Chilliwack -MAY 26 UPDATE – Global reports that robbery charges have been recommended against the 21 year old Chilliwack Man, caught on video after a violent pot shop robbery in March (Weeds Glass and Gifts shop on Victoria Drive). He was later captured.

MARCH 8 ORIGINAL STORY – Vancouver Police have identified and arrested a 21-year-old Chilliwack man as the robbery suspect in security footage released on March 7. The man’s name has yet to be released.

Around 1PM on the afternoon of  November 4, 2017, a young man entered the Weeds Glass and Gifts marijuana shop on Victoria Drive near East 34th Avenue. After a brief conversation with a female staff member, the video showed the robber jumping onto the counter, assaulting the employee, and stealing product from the shelves. He then allegedly assaulted a second staff member just outside of the store as he flees.

Police received a number of tips from the public following the release of security footage, and the suspect was arrested later that night. He has been released from custody with several conditions pending further investigation and approval of criminal charges.

VPD are not saying how they know that the suspect is from Chilliwack.

Welcome to Hell – Inside Canada’s Most Decrepit Prison