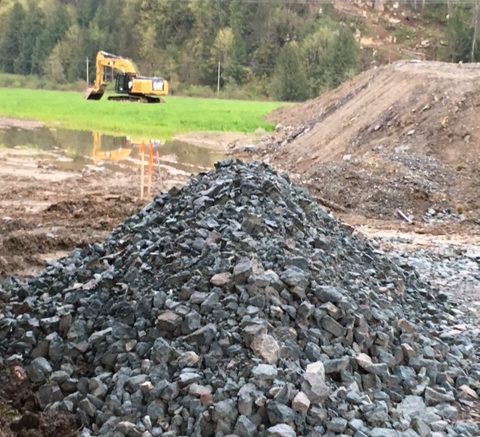 Harrison/Kent – APRIL 26 UPDATE – The petition from Friends of Agassiz and Harrison Hot Springs was delivered to Chilliwack-Kent MLA Laurie Throness who presented the paper to the Legislature on Thursday.

Throness also attached a note of his personal concerns about the project. 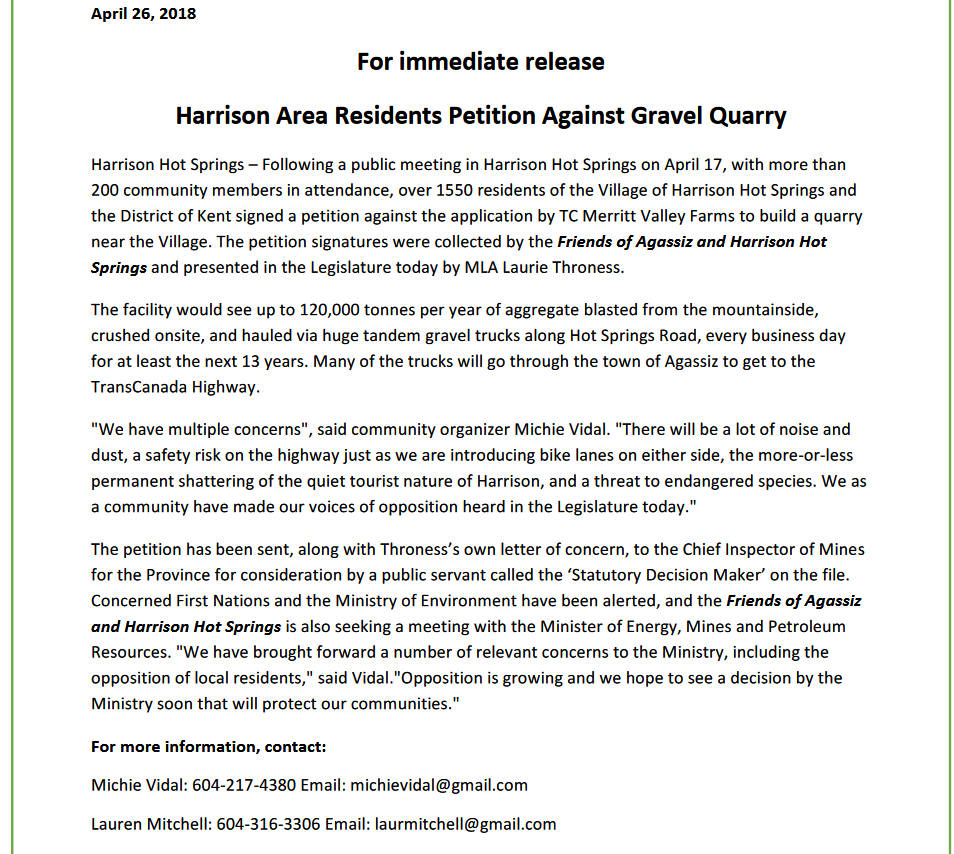 The background info from the organizers can be found here.

APRIL 23 UPDATE – Michie Vidal with the petition organizers told FVN that as of 3PM Monday April 23, there were over 15oo paper petition signatures, 2200 signed on line and for the record, the population of the Village of Harrison Hot Springs is 1500. Organizers are anticipating Chilliwack-Hope MLA Laurie Throness will present the petitions in Victoria on Wednesday or Thursday. A news release is expected to follow.

APRIL 21 ORIGINAL STORY – Similar to a recent controversy over a proposed (and defeated) concept for a gravel mine/quarry in Abbotsford off Sumas Mountain, comes an effort to stop a similar project that lies between Agassiz and Harrison, smack dab in the middle of the District of Kent and near the Agassiz Speedway and the Harrison Resort Golf Course.

Over 1000 signatures have come in under 3 days in opposition of the proposed Gravel Mine. Local government strongly opposes this project and organizers only have until Monday, April 23rd to submit their opposition to the Ministry of Energy, Mines & Petroleum.

That petition can be found here:

Organizer Lauren Mitchell told FVN : “There are only 1500 residents in Harrison so we know it’s an uphill battle, a similar application on Sumas Mountain had over 6000 signatures and it did get denied. Would love to get at least 2000 before we send it in on Monday. We also have an legal offline petition that is registered with the clerk’s office going around door to door that will be presented to the Legislative Assembly by Laurie Throness but we don’t know the numbers on that one yet.

We had a community meeting last Tuesday and over 220 residents showed up in opposition.
The Mayor of Harrison and Tourism Harrison have both voiced their strong opposition to the project, but since it’s located in the district of Kent, just outside the village boundaries, and the district won’t speak in opposition, it feels like it has been dumped on our doorstep. Ultimately the Ministry of Energy & Mines will make the final decision.” 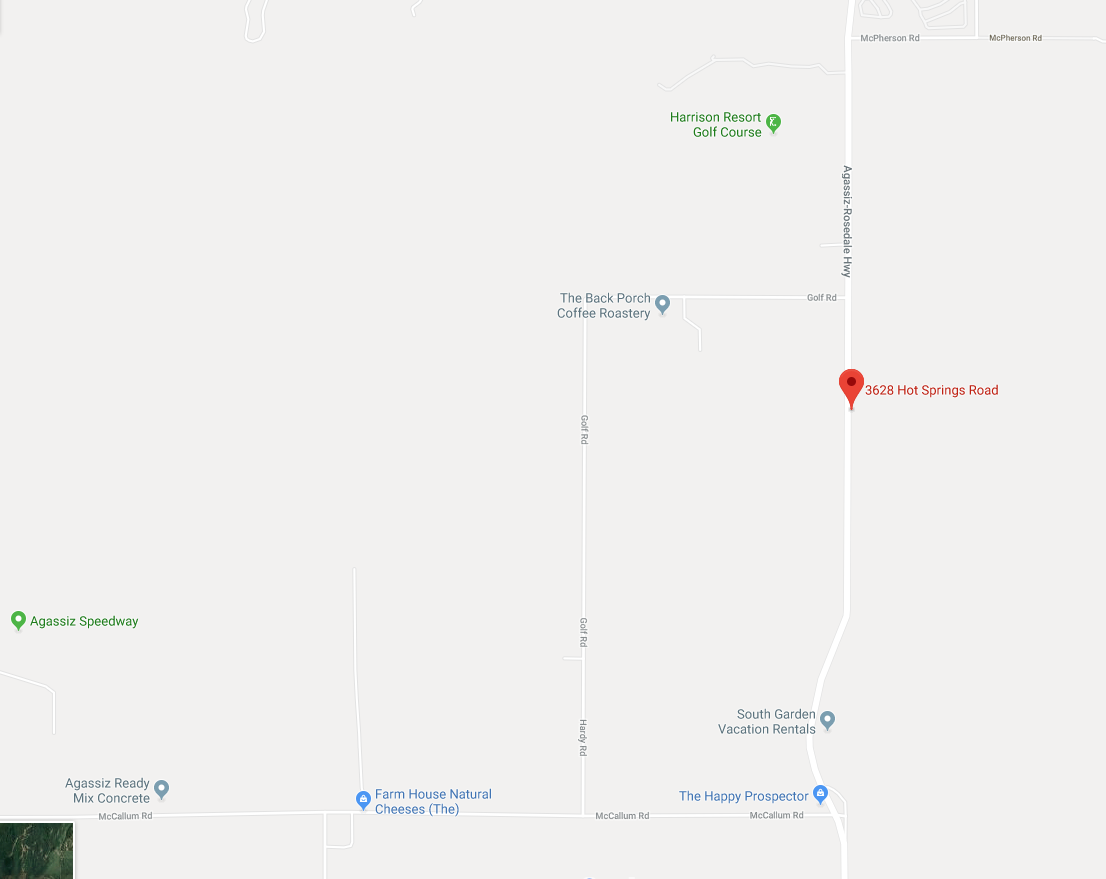 This petition is an outreach to members of the impacted communities and concerned members of the public to express their position on the aggregate mine application to be located at 3628 Hot Springs Road to the Ministry of Energy and Mines, alongside the local and regional governments who are also opposed to this project. 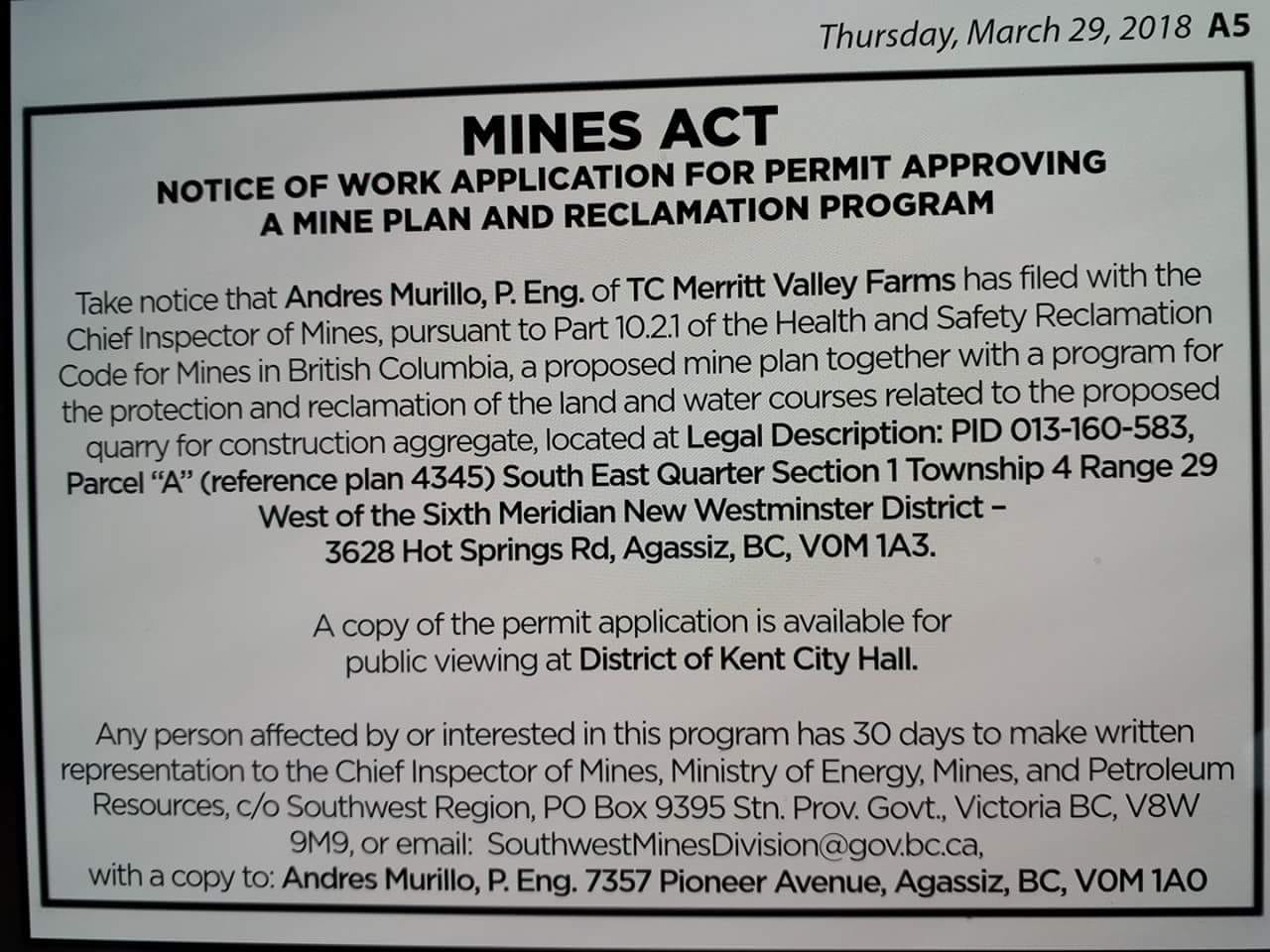 The additional truck traffic from this project, estimated at up to 12,000 gravel trucks per year for the next 13 years, will cross and travel along busy Provincial Highway #9 (Hot Springs Road). This route is the only access into Harrison Hot Springs, which if blocked, could prevent emergency vehicle access. Trucks will continue though the centre of the town of Agassiz, past a school and residential areas already afflicted by the existing 4,000 logging trucks that pass through annually. A shoulder enhancement project between the communities will add a cycling path along both sides of the highway, and cyclists newly traveling the road will be put at risk.

Nearby aggregate mines are adequate to supply material for construction purposes, making this quarry unnecessary. Noise and dust from crushing and blasting operations will disturb the peace of the community, and expose nearby residents to the negative health effects of silica dust.

Environmental impacts on the affected stream and watershed, which carry endangered species, cannot be mitigated. 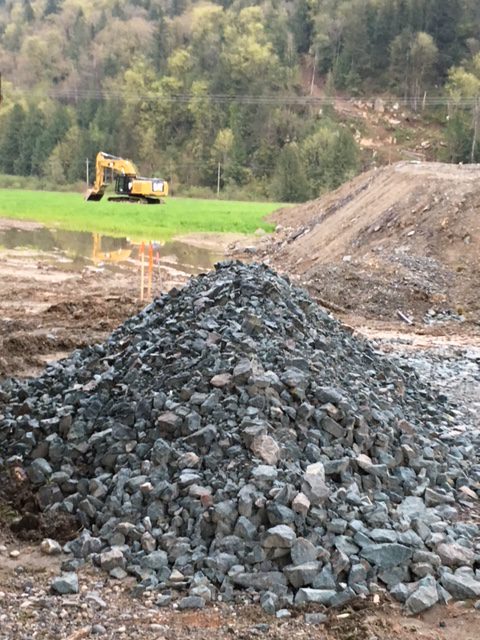