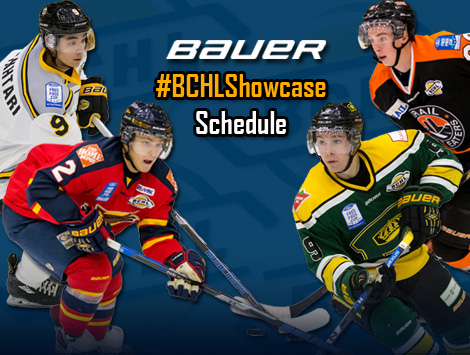 Chilliwack – The matchups are set for the sixth Bauer BCHL Showcase happening Sept. 20 to 24 at Prospera Centre in Chilliwack.

All 17 teams will again play two games each at the Showcase for a total of 17 games at the event. All games count in the regular-season standings.

The Showcase will have a strong presence of scouts from the college and NHL ranks with as many as 200 talent evaluators expected to attend. The Showcase, which started in 2012, has featured such players as NHLers Troy Stecher, Danton Heinen and Tyson Jost as well as 19 NHL draft picks including Dante Fabbro, Dennis Cholowski, Adam Tambellini, Jack Ramsey, Dane Birks and Nolan De Jong.

All games this year will be played on the main sheet of ice at Prospera Centre. Ticket information and other details will be released at a later date.

The schedule is as follows: