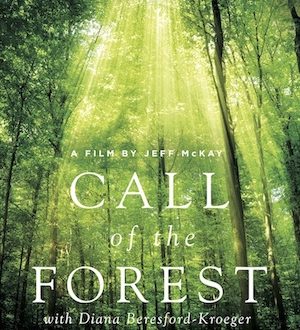 Winnipeg/Chilliwack – Take a walk in the woods with visionary scientist and acclaimed author, Diana Beresford-Kroeger, as she reveals our profound human connection to the ancient & sacred northern forests and the irreplaceable role that they play in sustaining our health. Call of the Forest, which has sold out theatres across the country, will be launching in Chilliwack from June 23-29 at the Cottonwood 4 Cinemas (see below for details).

Call of the Forest – Theatrical Trailer from Treespeak Films on Vimeo.

The film follows Beresford-Kroeger’s journey across the globe as she meets the people working to protect the last of these native forests. Along the way, she shares her wisdom on the folklore and healing power of trees, offering simple ways that each of us can help reforest our neighbourhoods and backyard. As Beresford-Kroeger says, “It will start with an acorn and shovel, and we might just change the world.”

“Call of the Forest is magnificent! This is a very important film, and I hope that a copy is put in the hands of every politician in Ottawa.” – David Suzuki, scientist and broadcaster

“Call of the Forest is a film of rare significance.” – Annie Proulx, Pullitzer Prize-winner

The film was produced by Merit Motion Pictures and Edgeland Films with the participation of Canada Media Fund, Rogers Documentary Fund, Manitoba Film and Music, Tree Canada, Rogers Telefund, The Canadian Film or Video Production Tax Credit and the province of Manitoba.

Chilliwack screenings of Call of the Forest: The Forgotten Wisdom of Trees:

Be the first to comment on "Call Of The Forest: The Forgotten Wisdom of Trees – Chilliwack Theatrical Release June 23 – 29"