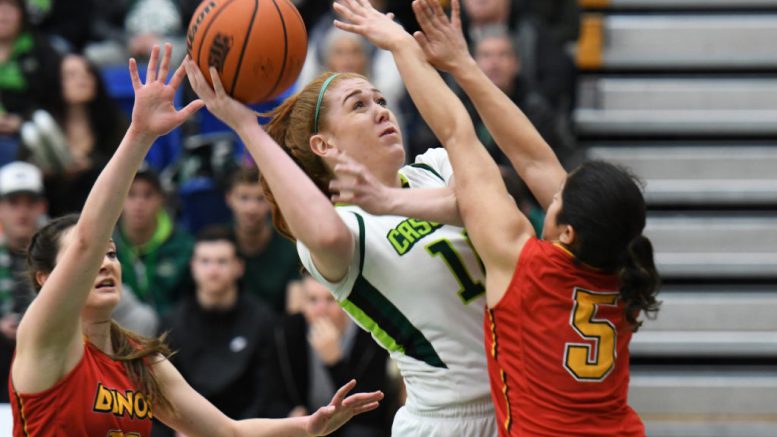 Women’s Basketball: Huskies pull away from Cascades in Game 1

The Saskatchewan Huskies reeled off a 19-0 run bridging the first and second quarters to break the game open, igniting a 78-55 victory over the University of the Fraser Valley Cascades in Game 1 of their Canada West quarter-final series in Saskatoon on Thursday.

The Cascades, seeded No. 8 in the conference, had a solid start to the contest, going ahead 16-10 in the first quarter after Kayli Sartori absorbed contact on her way to the hoop, hit the shot, and swished the ensuing free throw.

But the No. 1-seeded Huskies limited UFV to just two points over the next nine minutes of play, and surged to a 46-27 halftime lead.

Fraser Valley was able to slow down the Huskies’ offence in the second half, but weren’t able to get back within striking distance. Saskatchewan led 64-40 after the third, and the Cascades outscored the Huskies 15-14 in the final quarter.

“I thought we hit a wall real early,” said UFV head coach Al Tuchscherer, whose charges were coming off a gruelling first-round series vs. the Calgary Dinos. “We had a good start, and a couple things didn’t go our way – they hit a couple shots and got right back in the game. We just weren’t able to turn the tide at all . . . we were unfocused and scattered, and our attention to detail wasn’t there.

“Saskatchewan just continued to play well. They got better as the game went on, and we didn’t.”

Shayna Litman and Sartori combined for 41 of the Cascades’ 55 points in the game, scoring 21 and 20, respectively. Litman also recorded eight rebounds, while Sartori added four assists and two steals.

Sabine Dukate paced the Huskies with 21 points, while Madeline Humbert’s 10 points off the bench included seven during the pivotal 19-0 stretch in the first half.

The two teams shot similar percentages from the field – the Huskies were at 43.8 per cent while the Cascades hit 40.0 per cent – but the difference was stark from beyond the arc. Saskatchewan went 10-for-23 from the land beyond (43.5 per cent), while UFV came up empty at 0-for-7. The Huskies also got the better of the Cascades on the glass by a 38-21 margin.

“Give Saskatchewan full credit – they looked sharp and they looked prepared, and they took things away from us tonight,” Tuchscherer said. 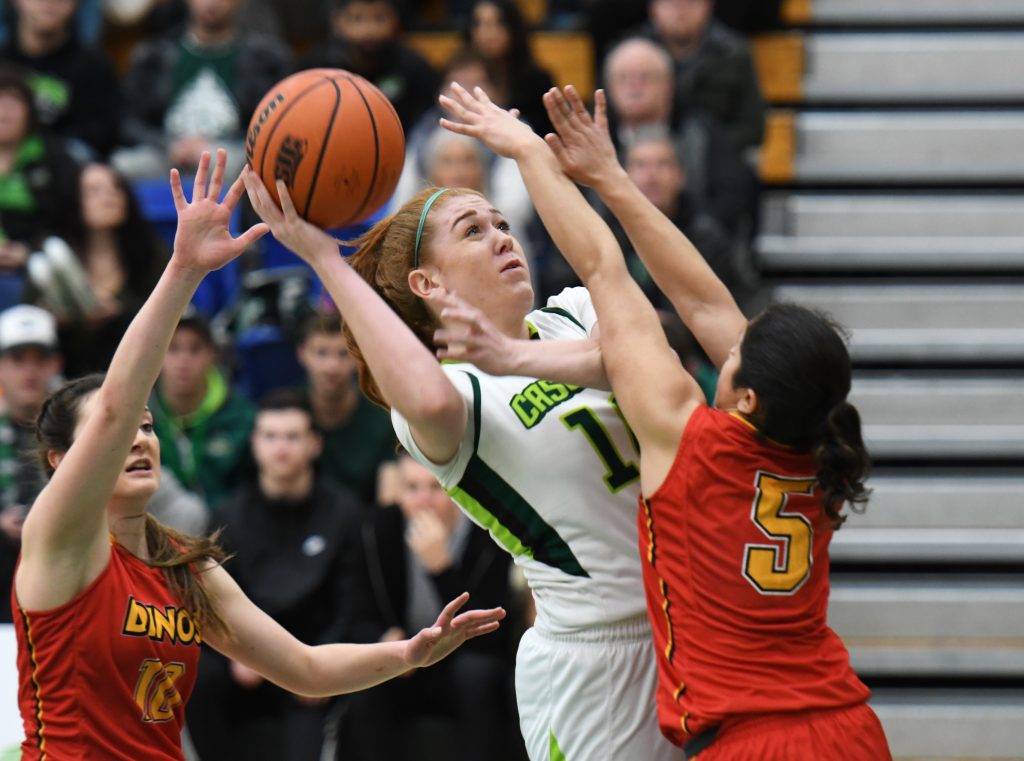 In a game of wild momentum swings, the University of the Fraser Valley women’s volleyball squad was unable to capture it for long enough, dropping a four-set decision to the College of the Rockies Avalanche in the PACWEST quarter-finals on Thursday.

Playing at Vancouver Island University in Nanaimo, the No. 4-seeded Avalanche prevailed by scores of 25-23, 25-21, 19-25, 25-23 and will move on to face host VIU in Friday’s semifinals. The No. 5 seed Cascades, meanwhile, saw their season come to an end.

Despite losing the first set, UFV head coach Mike Gilray felt his charges were in good shape – they were earning plenty of points and had good energy, it was just a matter of cutting down on the points they were giving the Avalanche via errors.

The start of the second set, though, was far from ideal as COTR raced out to a 15-3 advantage. The Cascades were undeterred, and responded with eight straight points behind some tough serving from Kim Bauder. They would eventually knot the score 20-20, but the Avalanche regrouped and scored five of the next six points to take the set.

UFV controlled the third set and took it in relatively straightforward fashion, but in the fourth, COTR came up big in the late going to punch their semifinal ticket and eliminate the Cascades.

“As a coach, I’ve got to take one and say I didn’t have my team playing its best volleyball at the end of the year,” UFV head coach Mike Gilray said afterward. “Offensively, we just didn’t connect today . . . COTR was the better team.”

That said, the Cascades did excel in several facets of the game on Thursday. They had their best passing game of the year in Gilray’s estimation, led by Rachel Funk (17 digs) and Amy Davidson (13 digs), and also had a strong performance at the service line paced by Bauder’s three aces.

Funk’s 15 kills were a team-high, Cassidy Pearson came off the bench in the second set to notch 11 kills, and Monique Huber had 10 kills.

Thursday’s result was “a little sour-tasting,” Gilray noted, but he believes the team progressed this season. Nearly the entire roster, with the notable exception of middle Mandelyn Erikson (graduation), is set to return in 2017-18.

“A lot of other teams are graduating a lot of fifth-years, and we really feel or program’s moving in the right direction,” he said. “If we take this loss as a learning point, it’ll be a key moment for this program moving forward.”

Be the first to comment on "UFV Sports Thursday – Women’s BBall, Volleyball Playoffs"