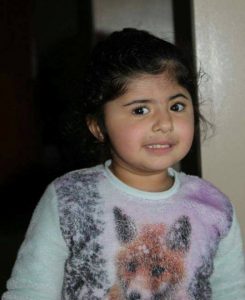 Abbotsford – The BC Coroners Service has confirmed it is investigating the case of a three-year-old girl who died at Abbotsford Regional Hospital on February 7, 2017.

Nimrat Kaur Gill, who lived in Abbotsford, had been taken to the hospital emergency ward by family members on February 6, 2017, and had been discharged home the same day. The next day her condition worsened, and she was returned to the hospital. She died later that day.

(Her parents were alarmed when they were told to give the child , basic over the counter meds (Tylenol) and were sent home. That’s when things deteriorated and she was rushed back to Abby Hospital and soon after died. A doctor’s report released to the media stated “It appears that Nimrat succumbed to a large left-sided pneumonia and septic shock with resulting respiratory failure leading to cardiac arrest. Fraser Health has launched an investigation”).

The Coroners Act requires that all deaths of children be reported to, and investigated by, the BC Coroners Service. The purpose of the investigation is not to find fault, but they have the power to make recommendations.