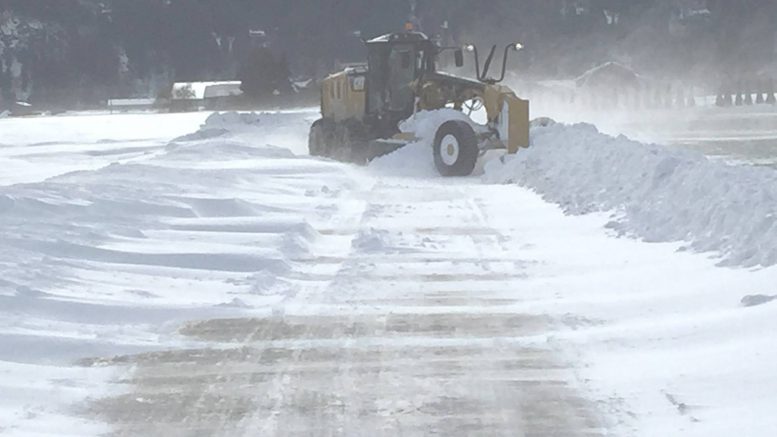 Fraser Valley – This winter blast is a pain for snow clearing crews and budgets, and there is another side that is troubling. So far, officially, there has been one Valley death due to the cold and snow. A 51 year old women was buried under the snow and trapped in her tent. This was in the camp behind the Eagle Landing Wal-Mart.  The concern is that there could be others, but FVN has yet to find out from any official source willing to go on record.

The Fraser Valley is expecting one more blast of winter that is riding the coat tails of this Arctic Front and that has the potential of 20 – 30 cms of snow before we see “normal” temps ramping up between PLUS 6 – 8C by Monday.

But Sunday will be tricky has moisture rolls in with a mild front which will run smack dab into the receding cold front.

FVN asked the Mayors of the two major cities, on how the snow removal budget is holding up.

Abbotsford Mayor Henry Braun didn’t tip his hat with numbers. He simply stated that the City had not blown through their snow budget and did not elaborate. UPDATE DECEMBER 20 –

The City of Abbotsford is still well under its budget for snow and ice removal this year.

Between last Wednesday December 7 and Monday December 12, the 70 man crews working non stop 12 hour shifts ripped through $350K of the annual $1M budget.  BUT, remember back in the early stages of 2016, we had a little snow and ice/freezing rain and that ate up a good chunk of change. Bottom line, $690K has been spent and we still have a little way to go in December.

Drifting along Banford, Evans, Prest and Lickman have also caused problems where crews have had to go out in the sub-zero temps and to some  heavy lifting. The hillsides and main arteries remain the snow clearing priorities.

For the record, Montreal’s infamous snow removal budget is, on average, some $155M.

So it’s one more storm, before the calm.