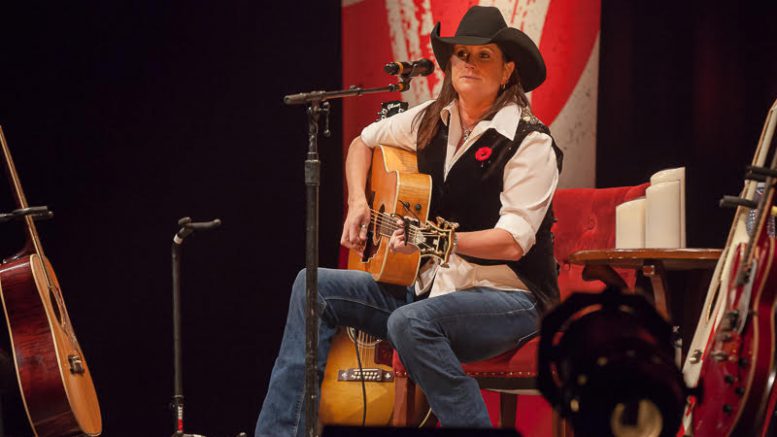 Mission (Tom Paillé) – So, Terri Clark is coming to town. Saturday at the Vogue, to be specific.  The B.C. leg of the tour had her in Mission Wednesday night at the Clarke Theatre.  This is different though.
She’s touring again, yes, but she’s not promoting a book, or new music.  She’s just out having fun, doing whatever she feels like that day.  After twenty-one years in the business, she’s earned that right.  It’s a stripped down tour;  just her, a chair, her guitars, some songs, and some stories.
The stories encompass a career that’s earned her Junos, platinum-selling records, multiple #1 hits here and in the US, and, is currently the only Canadian woman who has entered into the GrandOle Opry.  The stories are funny, the laughter (and the odd snort) is genuine, the audience is engaged and love every minute of it.
Terri took song requests from the crowd but got too many so she polled the audience and played the winning choice, ‘Girls Lie Too’.  The actual set list changes night to night but Terri makes sure each album gets a song in.  A highlight was the song ‘Smite’, a tribute to her Mom.  The story she tells about how she came up with the song is touching and you can tell that playing it was emotional for her.  Terri held it together, but it looked like it took some effort when she paused for a moment as the song ended with her head bowed.  Her trademark Stetson hid any sign of tears.
After a set that includes some insane guitar skills during a medley of country song standards she would play in Nashville starting out her career, Terri finishes with own standards like ‘Northern Girl’ and ‘Better Things To Do’.
After her performance, she comes back on stage and had a Q & A session with the audience.  It’s easy to tell why Terri Clark is a Canadian favourite.  She gives back to her fans, in spades.
Photos courtesy , Tom Paillé Photography
https://paillephoto.smugmug.com/Concerts

Be the first to comment on "Review – Terri Clark In Mission"